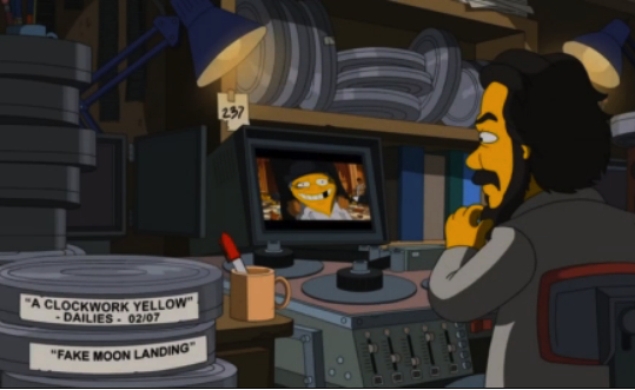 The Simpsons often returns to the same well for references and gags, which is inevitable when a show has been on the air as long as it has; at this point, audiences could be forgiven for thinking the show pre-dates television, and began life as a series of silent shorts ghost-directed by Ub Iwerks. The show has always had a soft spot for the films of Stanley Kubrick, famously and ingeniously spoofing his work throughout the years, most notably in the 1994 Treehouse Of Horror segment “The Shinning,” a much-loved parody of the conceptually and linguistically similar The Shining.

But The Simpsons has never made a Kubrick homage as packed with allusions and references as last night’s Treehouse Of Horror parody of A Clockwork Orange (which inspired one of Bart’s Halloween costumes in an earlier episode). In the course of a minute and a half, the show manages to reference A Clockwork Orange (of course), Eyes Wide Shut (in the form of Mr. Burns’ debauched masked naked ball), Full Metal Jacket (whose tragic “Piggy” makes a brief cameo, rifle in hand), 2001 (Homer beats Sideshow Mel with a bone, later the monolith makes an appearance), and possibly Barry Lyndon. It’s so dense and crazy with references, that even The Comic Book Guy, the show’s resident sneering expert on all things pop culture, is forced to concede, “Even I forget what this is a reference to!” after getting half his leg blown off with a musket shot. You’re not alone, Comic Book Guy, you’re not alone. Are we missing anything? Did they sneak in cheeky references to Fear And Desire or Killer’s Kiss?