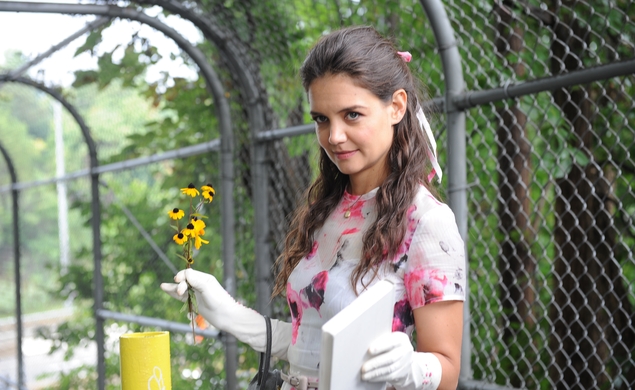 Back in April, after the 2014 Tribeca Film Festival, I wrote up a summary of some of the best films I saw—the ones already headed to theaters, the ones with some hope of getting American distribution, and the ones with little hope. One of the latter was Miss Meadows, Karen Leigh Hopkins’ daffy vigilante romance, starring Katie Holmes as a psychotic elementary-school teacher with a Julie Andrews-like upbeat sweetness, and a frequently used gun in her purse. (Back in April, I described her character as “half Amy Adams in Enchanted, half Michael Douglas in Falling Down.”) But I figured the film’s oddball toxicity, with Holmes tap-dancing amid CGI bluebirds and deer one minute, and gunning down a snarling would-be rapist the next, would make it an impossible sell in a market that wouldn’t know how to market it. I’m glad to be wrong: Entertainment One is bringing the film to theaters and VOD on November 14. Here’s the new trailer:

The trailer is pretty frank about the film’s more violent content, but less so about its jarring tone: It doesn’t begin to get across just how much of a sweetie-pie Disney Princess Miss Meadows is (when she isn’t shooting people or threatening to murder a child molester). This is a grown woman who dresses in white kid gloves and patent-leather shoes, and talks in the kind of chirpy little-girl voice that’s constantly threatening to burst into song, and one of the film’s more disturbing elements is its gentle relationship between Miss Meadows and an adult man (James Badge Dale, from The Lone Ranger, Iron Man 3, and Shame, among others). He’s clearly an old-fashioned kind of guy who finds her old-fashioned manners charming, and she clearly isn’t quite as Disney-innocent as she acts, but it’s still creepy watching the two of them court, as if she’s a flesh-and-blood woman instead of an exquisite Barbie doll who picked up G.I. Joe’s weaponry. I can’t wait for more people to see it and start the inevitable debate: Delightfully weird, or just plain weird?