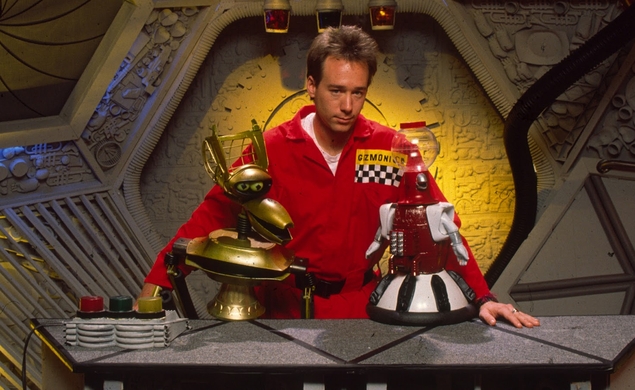 Okay, quick show of hands: Who loves tooling on lovably bad movies? Wow, everyone? Then it comes as no surprise that cult-classic TV show Mystery Science Theater 3000 enjoys considerable popularity around these parts. From 1988 to its cancellation in 1999, the beloved program brought together a colorful cast of kooky characters to riff on hokey sci-fi clips from long-since-forgotten films, combining an admirable passion for Z-grade cinema with absurdist comedy. In its ever-expanding universe of lovable weirdness and ultra-niche appeal, the show known by many as MST3K predicts everything from podcasts like How Did This Get Made? to the specialized film criticism now flooding the Internet’s nether corners. The show could never establish a solid footing during the pre-online-message-board era, getting traded from Comedy Central to Sci-Fi. However, the program has amassed a sizable, passionate following among trash-movie nuts in the years since its untimely death. Today, Variety brings news that’ll be sure to delight MST3K fans: Two of the program’s original stars, Joel Hodgson and Trace Beaulieu, have agreed to appear in Paul Feig’s upcoming Yahoo series Other Space.

Yahoo describes the half-hour comedy, set for a spring 2015 release, as “a journey in unknown space set in the early 22nd century, when the human race has mapped most of the known universe, failed to find alien life, and frankly gotten a little tired of the whole thing.” Hodgson expressed excitement about the mini-reunion: “I’m thrilled to be cast with my old buddy Trace Beaulieu… I also think fans of MST3K will be very interested in this new work that mastermind Paul Feig and his cast and crew have cooked up for Yahoo.”

Interestingly, Hodgson and Beaulieu each played small roles on Feig’s beloved television series Freaks And Geeks. This is just the latest development in a small resurgence for MST3K. Last month, more than 80 episodes of the original series were made available on video-streaming service Vimeo, enabling a new generation of fans to bear witness to the terrible majesty of, for instance, Gamera.