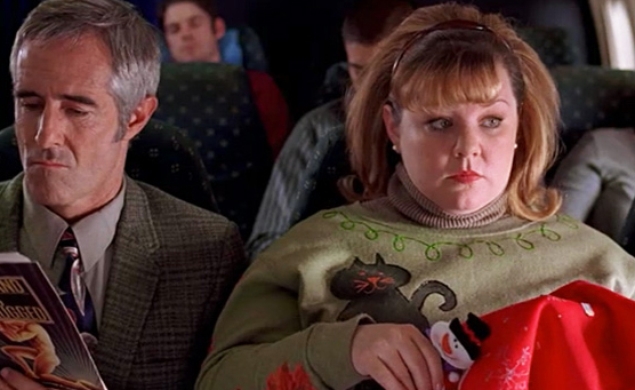 We begin this entry with St. Vincent, a sappy quirk-fest/quirky sap-fest that casts Bill Murray as an incorrigible scamp of a drunken, whoring, gambling ne’er-do-well who forms an unlikely but supportive makeshift family with the pregnant Russian prostitute he frequents and the precocious son of Melissa McCarthy. This leads Netflix to recommend a film McCarthy starred in before Bridesmaids transformed her into one of our least likely and most refreshing movie stars: 2008’s Pretty Ugly People, the directorial debut of Tate Taylor. Taylow would go on to direct Pretty Ugly People co-star Octavia Spencer to an Academy Award in their next collaboration, The Help, and most recently helmed the James Brown biopic Get On Up.

Pretty Ugly People has a premise so staggeringly, insultingly stupid that it would require brilliant execution to pull it off. (Unfortunately, the execution isn’t even good, let alone brilliant.) Lucy (Missi Pyle) calls her college friend Becky (McCarthy) to weepingly tell her that “it’s almost over” and “there isn’t much time left,” and that Becky should reunite their college friends for a farewell in a remote lodge in Montana. Becky naturally assumes that Lucy is dying, when what Lucy is actually alluding to is her massive weight loss, which was kickstarted by a gastric bypass surgery that left her a mere four pounds away from her dream weight.

So her friends drop everything for the sake of what they think is Lucy’s dying wish, which is all the more surprising given that they are a singularly toxic aggregation of terrible human beings. Their ranks include Raye (Phill Lewis), an uptight, self-loathing conservative congressman who treats his wife Mary (Spencer) like his assistant and seems deeply ashamed of their shared African-American heritage; Austin (Larry Sullivan), a flight attendant who pretends to be a pilot to impress people; Trevor (Jack Noseworthy), a rap producer; and George (Josh Hopkins), a gay commodities trader. But the worst of the bunch is Becky’s husband Richard (Philip Littell), often seen re-reading Atlas Shrugged and discoursing on the proper way for people such as his wife to behave.

If lured to a remote cabin under such fake, manipulative circumstances, most folks would undoubtedly tell Lucy to go fuck herself, then walk home by foot if necessary. But then there would be no movie. So instead, this miserable group of grumps embark on a hiking trip during which all of their dirty little secrets come tumbling to the surface.

Becky is having an affair with a gym teacher (played by McCarthy’s husband Ben Falcone, adorably enough), something we only learn after she repays Trevor’s generosity in lending her his satellite phone by shoving it into her pants in a strange, misguided round of phone sex. Richard learns that his wife, far from being the untouched paragon of virtue he imagines her to be, was so promiscuous in college that she earned the nickname “Thumper,” something one of the gents charmingly informs Richard of early in their voyage of the damned. Oh, and Trevor was dumped because of his tiny penis.

It’s hard to see why Lucy ever admired these people beyond their thinness and ostensible attractiveness. The film builds to the depressingly facile, heavy-handed message that beauty and ugliness are ultimately internal rather than external, and that Lucy never should have worshipped such a deplorable, self-loathing group of creeps. But Lucy doesn’t come off much better. She’s a terribly underwritten character, more a catalyst than a human being, and her big speech where she chastises these people who cast aside everything to be by her side and support her pathological self-absorption reflects as poorly on her as anyone else. Pretty Ugly People is all about terrible people being terrible to each other for 90 minutes, before turning things around for 10 minutes of unearned redemption after a bus accident costs Richard his life—or more accurately, puts him out of his misery. He’s such an abysmal human being that his only shot at salvation lies in dying with a little grace.

McCarthy and Spencer both do fine, nuanced work in this clumsy dramedy, and Lewis makes his character far more interesting and sympathetic than he has any right to be. So will audiences for St. Vincent dig Pretty Ugly People as well? I’m going to say no, and in an unprecedented move in this column, suggest a different film: John August’s directorial debut The Nines, which features one of McCarthy’s best, and little-seen performances. If you’re looking for a semi-obscure sleeper with McCarthy, that is your best bet. Even with an actress as appealing as McCarthy at its core, Pretty Ugly People is the opposite of a hangout movie: It’s full of people you’ll probably be glad to get the hell away from.