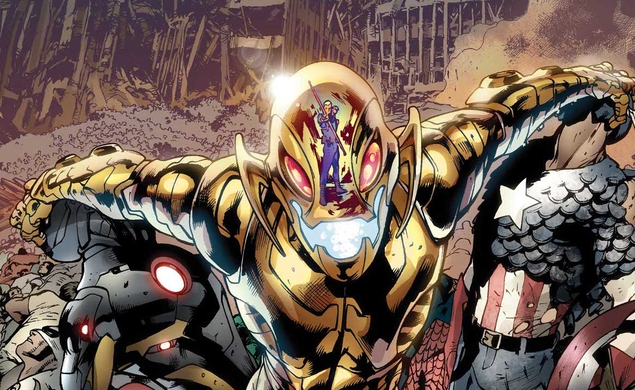 Marvel.com has the exclusive (however did they get it?!?): James Spader, of Sex, Lies, And Videotape, Stargate, and Secretary fame, will face off against The Avengers as the titular villain in 2015’s The Avengers: Age Of Ultron.

If you haven’t wasted your life like I have and don’t know who Ultron is, a little background: He’s a big evil robot.

Okay, yeah, there’s more, but who knows how much of it will actually carry over from comics to film. In the comics, Ultron was created by Hank “Ant-Man” Pym, but in the movies there is no Hank “Ant-Man” Pym yet, so his origin will almost certainly be reconfigured. The only other detail that might be worth mentioning is that his body is made out of adamantium, the unbreakable metal that’s bonded to Wolverine’s skeleton and claws. So he’s a tough nut to crack, so to speak.

No word yet on how Spader will play the role; personally I’m hoping he actually appears in the film in a rubber faux-metal suit, like Shaquille O’Neal wore in Steel. Those always freak me out.