I assure you, Kevin Smith found the funding for Clerks III (because of Tusk) 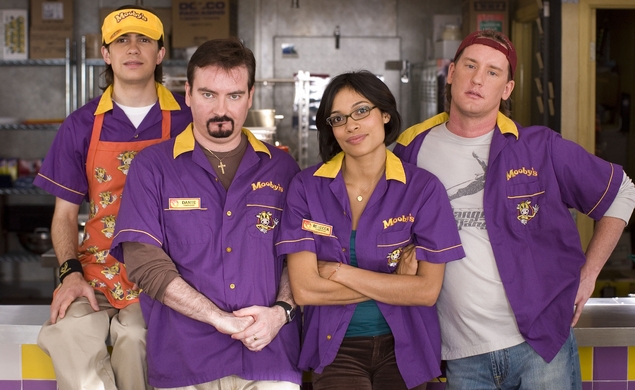 The first Clerks sequel, 2006’s Clerks II, was supposed to be the final farewell for Kevin Smith’s View Askew characters, as central New Jersey’s most famous filmmaker intended to move on to new opportunities. Smith directed several more features, then announced an early retirement, at which point he tried new pursuits like podcasting, smoking weed, and making movies he invented during a podcast he recorded while smoking weed. The results of those potheaded efforts, Tusk, just opened in theaters to mixed reviews (including one here at The Dissolve) and fairly abysmal box-office results. After 10 days in theaters—even with a promotional tie-in with an officially licensed Tusk medical marijuana—the movie has made just $1.4 million. Can you believe stoners couldn’t get motivated to drag themselves off the couch and out to the multiplex? I know, it’s completely shocking!

Still, Smith is laughing all the way to the bank, or wherever a director of his stature goes to get financing for future projects. On the latest episode of his Hollywood Babble-On podcast, Smith said Tusk is already a success in his eyes, regardless of its box-office numbers, because it provided him with the funds he needs to make a third Clerks. More from Smith on the podcast:

“A year and change ago I was desperately trying to get Clerks III made for the 20th anniversary, and that desperation, I must have reeked of it, because I couldn’t fucking find money and shit. But it was Tusk; people going ‘Holy fuck, what else do you have?’ And I was like ‘Clerks III.’ And they're like ‘Done!’ So everybody that's like, ‘He failed, he failed,’ I'm like ‘Thank you, I failed into Clerks III.”

Smith also added that Clerks III wouldn’t be happening at all if not for Tusk, which is also the first installment of an entire trilogy of Canadian movies from Smith. Then, presumably, it will be back to Leonardo, New Jersey and another adventure with Dante and Randal. RST Video has to have gone out of business by now, right? What else could those guys be up to? Perhaps they’ll be podcasting and smoking weed in this one.