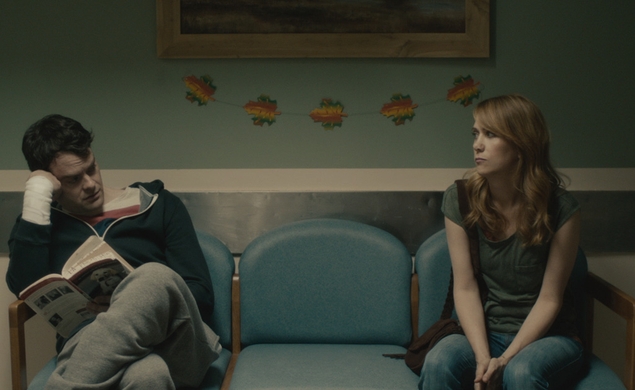 “You never open your mouth until you know what the shot is.”

Smart advice from Ricky Roma in Glengarry Glen Ross, but not always followed by TV reporters who sometimes have to open their mouths without knowing what the shot is. Late last week, Chris Parente, a journalist for KWGN in Denver, did a live interview with Kristen Wiig and Bill Hader, who were there to promote The Skeleton Twins, a drama about estranged adult twins trying to patch up their relationship. After hailing this “fantastic” film as the toast of TIFF—where it didn’t play; it premièred at Sundance—Parente started asking Wiig a playful question about “doing the news completely full-frontal,” which referenced another movie, Welcome To Me, which did play at TIFF, and in which Wiig does appear nude. The stars are kind under the circumstances, though I still had to watch this through webbed fingers. (Parente’s pronunciation of “Los Angeles” set my teeth on edge all by itself.)

The Wiig and Hader affair is just the most recent example of a specific strain of failed TV interviews—one in which the reporter is woefully unprepared, and can’t fake a way past it. That called to mind a few more:

1. Martin Landau vs. Kennedy. At the red-carpet première of 1996’s Mission: Impossible, MTV VJ Kennedy had an ugly encounter with the dyspeptic Martin Landau. Kennedy was doing just fine for a while, joking with the actor about his Oscar win for Ed Wood and asking him if he was excited to see the movie. Landau then realizes that the VJ isn’t aware he played Rollin Hand on the original TV show, and decides to unleash a blast of generational resentment. (Frankly, I think Landau is being unfair, despite my memories of Kennedy as the worst of the worst MTV had to offer at the time. The show was before her time, and knowing Landau’s role on it involves deeper preparation than seems required of a reporter talking to someone with no role in the movie.)

2. The Burt Reynolds slap. The word “dyspeptic” also applies to Burt Reynolds, who once slapped a CBS producer while working the red carpet for the Longest Yard remake. The producer asked Reynolds a vague question about his role in the film, Reynolds brusquely inquired whether he’d seen the original Longest Yard, and when the man said he hadn’t, the star delivered a swift offscreen slap. How “playful” was the slap? That was left for the publicists to sort out.

3. American Beauty star John Cusack. This one is just delightful. A college reporter sits down to talk to Cusack about the indie drama Grace Is Gone and chats about skipping film class that day, where they were watching the wonderful John Cusack vehicle American Beauty. The one with the rose petals. Which Cusack was in, right? Really, is he sure he wasn’t in it?