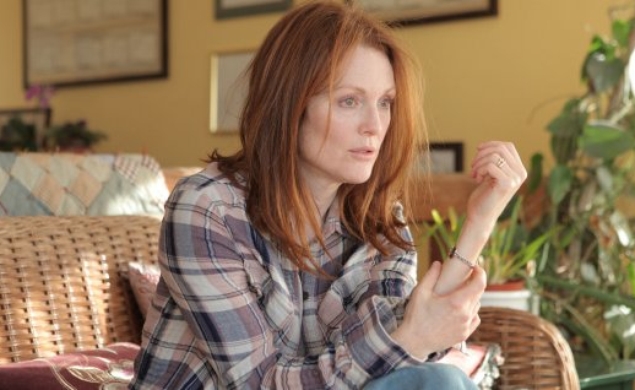 One of the biggest stories coming out of this year’s Toronto International Film Festival was the debut of Still Alice, and specifically Julianne Moore’s lead performance therein. Moore’s work as Dr. Alice Howland, a successful academic who’s beset by Alzheimer’s in her 50s, reportedly left pretty much everyone who saw it at TIFF in tears, with the exception of our ever-stoic Scott Tobias, who still had kind things to say about Moore in his otherwise lukewarm report on the film. Sony Classics, clearly aware of which way the wind was blowing, promptly snatched up Still Alice, and today announced it will release the film for an awards-qualifying limited run in December before its official release on January 16, 2015.

Barring a huge wave of critical praise for her upcoming supporting turn in The Hunger Games: Mockingjay—Part 1, or a very belated surge of support for Non-Stop, Still Alice—which also includes well-received performances by Alec Baldwin and Kristen Stewart—is poised to be Moore’s best shot at an Oscar nod this year, hence the rush to get it into New York and L.A. theaters before the end of the year. It would certainly not be Moore’s first shot at an Academy Award (she’s been nominated two times each for Best Lead and Best Supporting Actress), but it would be the first time she’s been nominated in over a decade... which seems a little ridiculous when you think about it. With Moore and the rest of the nominee field still existing purely in the realm of speculation, it’s fairly silly to hypothesize whether she might take home her first statuette for Still Alice, but it’s worth noting that Scott’s review dinged the film for “prodding too much for emotional effect,” which, frankly, sounds like exactly the sort of thing the Academy loves.