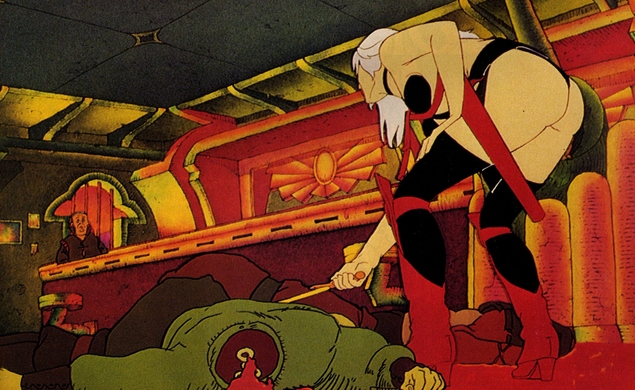 Heavy Metal: “The Mob Rules” by Black Sabbath
I don’t know what it says that the image of a bunch of laser-wielding warriors riding giant green bats on an alien planet thrills me as much now as it did when I was 10 years old, but there you go: It still does. That scene is one of a multitude from the 1981 animated sci-fi anthology Heavy Metal that still make my jaw drop—and that has as much to do with the music involved. Heavy Metal, despite its title, features a broad range of pop artists of the era, from Stevie Nicks to Devo to Cheap Trick. But sure enough, it’s when Heavy Metal goes heavy metal that the movie bursts off the screen. The bats-and-lasers battle scene that I love so much not only features a metal band, it features the metal band, at least as far as the early ’80s were concerned: the Ronnie James Dio-led incarnation of Black Sabbath. “The Mob Rules”—an alternate version of which appears on Sabbath’s 1981 album Mob Rules—soundtracks that phantasmagoria of pulpy, wanton carnage, and it does so with all the savage majesty it can summon. And we’re talking Dio here, so that’s a lot of savage fucking majesty.