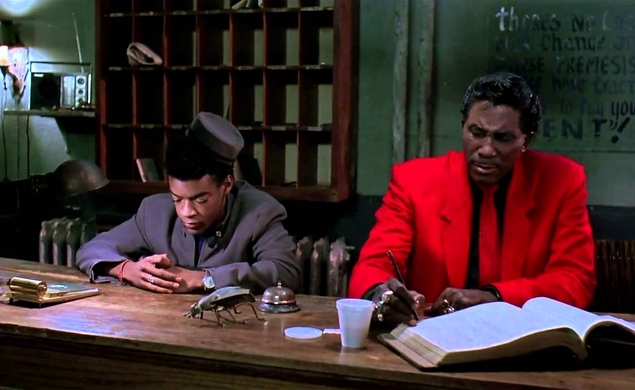 Mystery Train: “Blue Moon” by Elvis Presley
Jim Jarmusch’s Mystery Train is a play in three acts. Set in Memphis, it all takes place in the same 24 hours and focuses on three different stories that briefly intersect. The two most prominent loose threads tying them all together are the cheap motel managed by Screamin’ Jay Hawkins and a radio DJ (played by Tom Waits) playing “Blue Moon” at 2:17 a.m.

As the film’s title and location imply, Elvis looms over the whole movie, though he comes to represent many different things. He’s the King, the inferior option to Carl Perkins, a ghost story, an actual ghost, and to Johnny (Joe Strummer), the pejorative everybody tosses at him just because he’s a white dude with a pompadour. When Johnny sees Elvis’ portrait in their hotel room, he says, “Christ, there he is again. I can’t get rid of that fucking guy.”

Despite everyone’s associations with the King, negative or positive, “Blue Moon” is a subtly important stopgap for each character. However omnipresent that song and Elvis might be, there’s something about hearing it late at night that causes them to reflect. It’s quiet at night, so you actually get to hear what he’s singing. It makes you instinctively reach over and hold the person you love, or it makes you stare out the window and remember all the stuff that left you feeling so miserable. If you’re lucky, Presley’s ghost will appear.