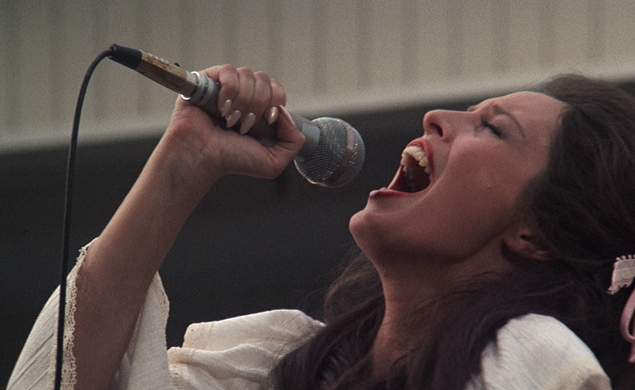 Nashville: “It Don’t Worry Me” by “Albuquerque”
Robert Altman’s 1975 film Nashville is a vicious skewering of mid-1970s country music celebrity, with the capital of both Tennessee and country music standing in for America at the Bicentennial. The cast famously sprawls to include more than 20 major characters, all of whom come together at the Parthenon for a concert benefitting fictional independent presidential candidate Hal Phillip Walker. SPOILER ALERT: When superstar singer Barbara Jean (played by Ronee Blakely as a Loretta Lynn avatar) is shot mid-song by a man in the audience, a dizzy hopeful name Albuquerque (Barbara Harris) picks up the microphone and finds her voice singing the alarmingly innocuous “It Don’t Worry Me.” She has spent the movie hitchhiking around town and wandering haphazardly into scenes, and by happenstance she finds herself at centerstage by the film’s end. As one star dies and another is crowned, Altman scans the crowd to sketch out epilogues for all of his unhappy characters. It might seem overly cynical if it weren’t so wryly, monumentally ambiguous: Does popular music soothe our grief, or just distract us from unsavory realities?