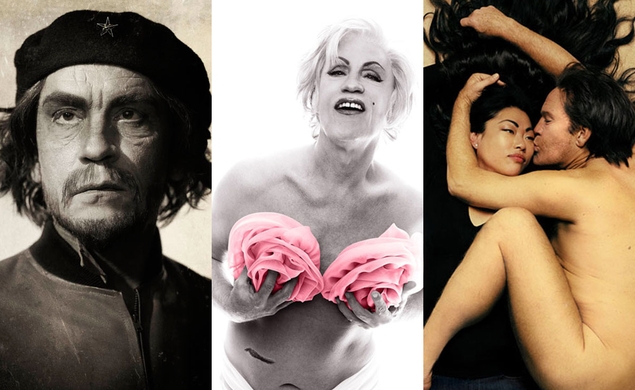 Photographer Sandro Miller has been collaborating with Red 2 star John Malkovich for 16 years, since the two met in the late 1990s at Chicago’s Steppenwolf Theatre. And now, they’ve created something can only be deemed their shared magnum opus: a series titled Malkovich, Malkovich, Malkovich: Homage To Photographic Masters, which will be running from November 7 through January 3 at Catherine Edelman Gallery in Chicago. The project reproduces some of the most iconic images of the 20th century, from Andy Warhol’s “Green Marilyn” to “Albert Einstein Sticking His Tongue Out,” with Malkovich standing in for the photos’ subjects. The images being paid tribute to range from Alberto Korda’s famous picture of Che Guevera staring purposefully into the distance, his eyes fiery with righteous passion in a revolutionary pose ubiquitous on the dorm walls and torsos of earnest college students, to Annie Liebovitz’s famous photograph of a naked John Lennon intertwined with Yoko Ono.

Malkovich isn’t just a disturbingly and surprisingly versatile model in these images: He’s a consummate actor who loses himself in these familiar tableaus while still retaining the ineffable Malkovichish nature of his being. So please do take a gander at the simultaneously impressive and trauma-inducing set of images over at the Edelman Gallery site, but be warned: Once seen, these things cannot be unseen.