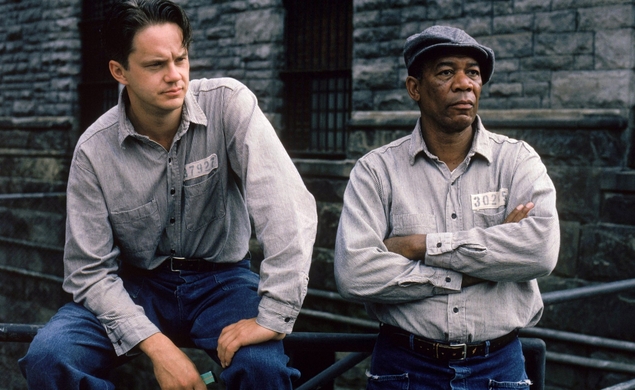 “Robbins merely flashes his famously inscrutable smile when asked about tensions on the set of Shawshank, though he does allow that any ‘difficult times . . . had to do with the length of the days.’ Freeman, like his character, Red, has no problem rounding out the narrative. ‘Most of the time, the tension was between the cast and director. I remember having a bad moment with the director, had a few of those,’ says Freeman. Most ‘bad moments’ stemmed from Darabont’s asking for repeated takes. ‘The answer [I’d give him] was no,’ says Freeman. ‘I don’t want to be chewing the scenery. Acting itself isn’t difficult. But having to do something again and again for no discernible reason tends to be a bit debilitating to the energy.’ Freeman recalls a scene where the guards re-trace Andy’s escape route, retching when they discover themselves sitting in raw sewage. ‘My character was listening and laughing, just howling with laughter. I had to shoot that too many times.’

The Atlantic’s Christopher Orr continues his journey through 30 years of Coen brothers movies with a look at No Country For Old Men:

“There are films that I think are better, but few that come so near to perfection. This is true across the board (Roger Deakins’s cinematography is, again, extraordinary), but nowhere is it more evident than in the movie’s sound design. There is almost no music in the film (and when there is, it’s little more than an ambient throb), and there are long stretches devoid of dialogue. This is a tremendous challenge both to mood and exposition, and sound men Skip Lievsay and Craig Berkey could scarcely have brought it off more brilliantly: the rustle of the dry wind, the sound of bullets piercing glass, the scrape of a briefcase along an air shaft—these make up what may be the most remarkable soundtrack of the Coens’ career.”

Grantland’s Bryan Curtis on the unique pleasures of Steven Soderbergh’s black-and-white silent version of Raiders Of The Lost Ark:

“Soderbergh calls out the ‘stark, high-contrast lighting style’ of cinematographer Douglas Slocombe, an old pro who’d shot Kind Hearts and Coronets. The hiring of ‘Dougie,’ as Spielberg called him, had an odd resonance; Slocombe, a London native, had traveled to Poland during the Nazi invasion. He photographed synagogues and the local gauleiter’s muscle-flexing. He then lived long enough to see history’s greatest monsters become the stuff of American pulp: ‘The Nazis have discovered Tanis!’ Slocombe is 101 years old now and, according to the BBC, nearly blind.”

“Gillian is astutely aware of what it is that she’s doing. At the same time, she’s a popcorn-munching, sitting-in-the-third-row, craning-her-neck movie fan. The fact that she had written this elaborately marbled novel initially gave us all pause: You know, would she be able to slaughter her darlings? But she didn’t just tree-trim—it was a deforestation! She could come in and remove anything that wasn’t working. And this is what initially got so blown out of proportion with Entertainment Weekly, this notion that she had concocted a whole new third act. It was still ostensibly the same thing, just attacked from a completely different vantage.”

Plus, the rest of today’s biz-ness:
-The trailer for Low Down, a jazz biopic starring John Hawks, Peter Dinklage, Glenn Close, and Flea
-Open Road Films distances itself further from the Midnight Rider disaster
-You can’t watch the trailer to Fast & Furious 7 yet but Vin Diesel’s seen it and says it’s “incredible.”