Out Of The Past: David Cronenberg’s Dead Ringers was released this day in 1988 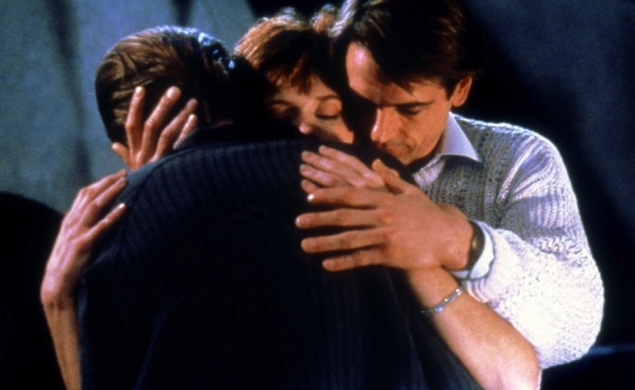 On July 19, 1975, the bodies of drug-addicted identical twin gynecologists Stewart and Cyril Marcus were discovered in the New York apartment they shared. That event event inspired the novel Twins by Bari Wood and Jack Geasland and, years later, Dead Ringers, a 1988 feature directed by David Cronenberg. It was viewed as something of a departure for Cronenberg at the time, a break from the grisly, inspired horror films with which he’d made his name. (There’d been a previous break, too, in the form of the little-seen racing film Fast Company.) Yet Dead Ringers was less a departure than a change of venue, relocating the body horror of films like Rabid and Videodrome to the minds of Elliot and Beverly, both played by Jeremy Irons. Though successful in the gynecological practice they share, they find themselves unable to function when life pushes them beyond the limits of the comfortable space they’ve carved out together, particularly once falls for Claire (Geneviève Bujold), a beautiful actress.

Part of what makes the film so resonant is the way it uses a particularly, and particularly strange, relationship to mirror the way all relationships require those in them to bend their identities, and the way new elements can throw those relationships out of balance, upsetting delicately arranged worlds in the process. Though the screenplay took minimal inspiration from the novel, the film ended one era for Cronenberg while beginning another, one that would find him bringing his sensibility to works originated by others, from William S. Burroughs to J.G. Ballard. Fitting that this phase would itself begin with a story of merged identities. Not that Cronenberg shed his old image easily. Even in this interview around the time of Dead Ringers’ premiere at the 1988 Toronto International Film Festival he was still being called “The Guru Of Gore”: