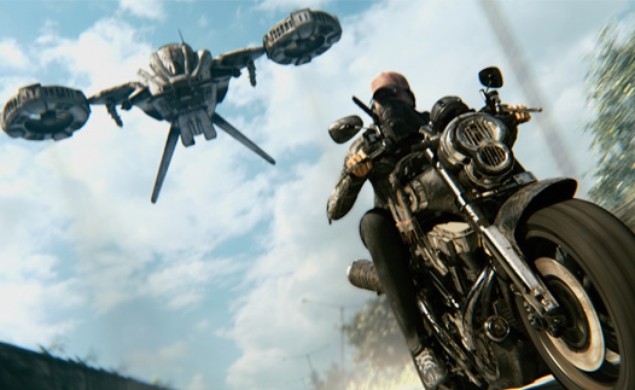 Tomorrow sees the release of The Maze Runner, director Wes Ball’s adaptation of James Dashner’s popular YA novel. It’s Ball’s debut as a feature filmmaker, and a job he won thanks to his 2011 animated short film “Ruin,” which he made while taking a mini-hiatus from his commercial effects company. There’s almost no plot to “Ruin.” Set in a post-apocalyptic future—in an abandoned city where vegetation has overtaken the skyscrapers—the film begins with a masked ravager pushing a box out of the window of a tall building, then retrieving information about a quarantined facility. When a drone flies above, a chase ensues. The last five minutes of the eight-minute film (minus the lengthy closing credits) are nothing but the ravager zooming through the city on a motorbike, with the drone on his tail.

Back in March, I wrote about how “Ruin” was being used to demo Barco’s new “Escape” wraparound movie screens. (The Maze Runner will also be released in the five current Escape-equipped theaters.) Just as “Ruin” makes sense as a tryout for The Maze Runner, it also makes sense as a showcase for new technology. While the film shows nothing of Ball’s skill with actors, dialogue, or storytelling, it does show a rare grasp of action choreography and effects. Once the film kicks into gear, it rockets off, hugging every curve tightly.

“Ruin” barely looks animated. Aside from the few close-ups of the hero’s face and hands, he looks like a real person—largely because he’s moving so fast and is so close to getting killed at any second that there’s not much time to think about how he and everything around him is computer-generated. (Besides, most live-action blockbusters these days have CGI-heavy action sequences anyway.) “Ruin” is a polished spectacle, putting the viewer in the place of a desperate man who’s in mortal peril—and in constant, rapid motion.