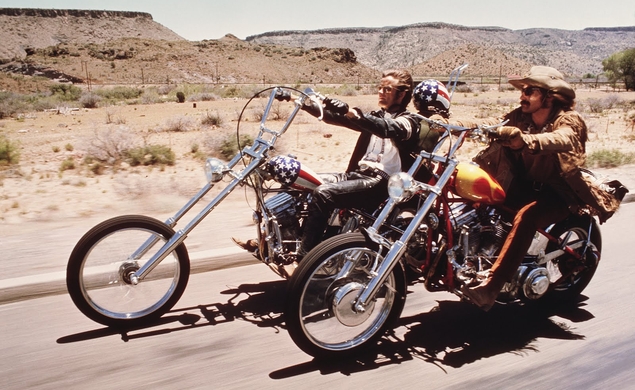 The journey’s not over for film’s most famous motorcycle. An AP item reveals that the last known existing version of the chopper ridden by Captain America, Peter Fonda’s character in Easy Rider, will soon be placed up for auction. Four were made, but three stolen before the film, according to the bike’s former owner, actor and former Grizzly Adams star Dan Haggerty, who also worked as a motorcyle builder on the film.

Haggerty, who had an uncredited role in the film, inherited the bike at the shoot’s end and held onto it for years. It’s since been in the hands of the National Motorcycle Museum in Anamosa, Iowa, and businessman Michael Eisenberg, who partnered with Fonda, Easy Rider director/co-star Dennis Hopper, and Dwight Yoakam for a motorcycle-themed restaurant that burned down in 1997. Soon, as in October 18, it can be yours for an estimated $1.2 million. (Maybe the guy behind this movie has the dough? That’s a steep price for a piece of movie history, but vehicles don’t get much more instantly recognizable.)

Would this be a good place to point out the oddness of a countercultural icon becoming such a high-priced fetish item in the capitalist system? That it’s a sign that maybe the generation represented in Easy Rider really did blow it, man? No? Okay, then how about Dennis Hopper reading a Rudyard Kipling poem on The Johnny Cash Show in 1970?