TIFF deal update: Still Alice, Tales Of The Grim Sleeper, and Phoenix all picked up 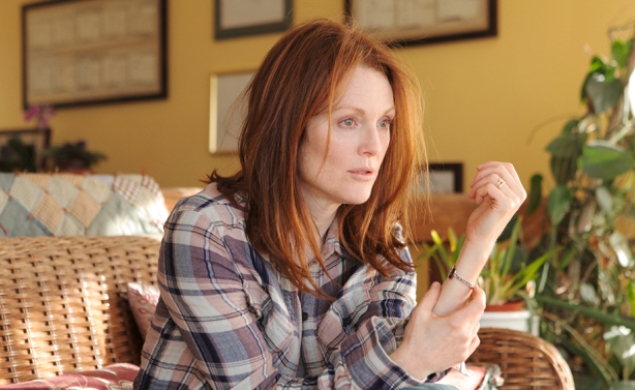 Prior to the start of the Toronto International Film Festival, one of the big awards-season stories was Focus World acquiring David Cronenberg’s Maps To The Stars and planning an early 2015 release date, which led some to wonder whether Focus would even give Maps an Oscar-qualifying run, to allow Julianne Moore’s highly acclaimed performance as an eccentric L.A. actress a chance to be recognized. Instead, it looks like any Maps Oscar campaign may now be tabled for good, after the Moore vehicle Still Alice came out of nowhere at TIFF, leaving critics and audiences deeply moved. Our Scott Tobias saw Still Alice and thought it was merely okay as a movie, but he joined the roar of praise for Moore’s turn as a well-off wife and mother who suffers from Alzheimer’s. And late yesterday, Sony Pictures Classics picked up U.S. distribution  rights to Still Alice, and announced plans to release the film later this year. Moore has never won an Academy Award, though she’s been nominated four times. Still Alice’s brighter awards prospects may have had a lot to do with Focus’ decision to hold back Maps To The Stars.

Still Alice wasn’t the only well-regarded TIFF film to get good news over the past couple of days. Two other movies that were among Scott’s favorites at the festival, Tales Of The Grim Sleeper and Phoenix, were also both picked up. Sundance Selects will handle Phoenix, Christian Petzold’s post-WWII suspense picture, about a concentration camp survivor who stalks the husband who may have betrayed her through Berlin. And HBO, which has a long relationship with documentarian Nick Broomfield, will handle Tales Of The Grim Sleeper, Broomfield’s film about a Los Angeles serial killer who may have eluded the police for so long because his victims—young black women—made him a low priority for the LAPD. The Sundance Selects and HBO pick-ups are good news for people who don’t live in big cities, since Sundance Selects films are frequently available via VOD, and HBO is HBO. As for Still Alice, it should be widely available to anyone with access to a good arthouse cinema. So for those who are keeping a want-to-see list of fall festival movies, there’s three more that you may soon(ish) be able to cross off.

Other festival films (as-yet-unseen by The Dissolve staff) that were picked up over the past couple of days include: the quirky midlife crisis dramedy Adult Beginners, sold to Radius-TWC; another post-WWII German drama, Labyrinth Of Lies, bought by Sony Pictures Classics; the low-budget John Travolta heist picture The Forger, picked up by Saban; Lone Scherfig’s collegiate period picture The Riot Club, which will be handled by IFC; and Sophie Barthes’ adaptation of Madame Bovary (starring Mia Wasikowska), purchased by Millennium.