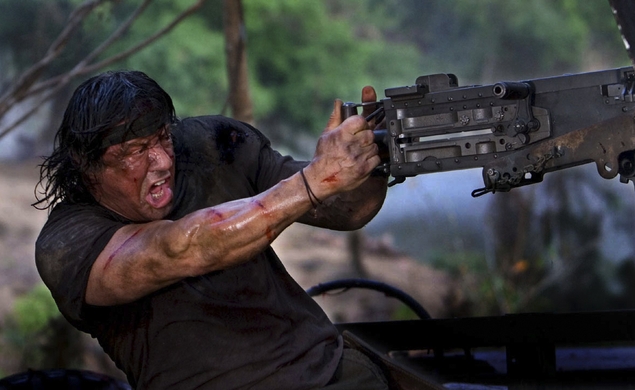 Evidence: “It was rumored back in June that work had started on another big screen entry in the Rambo franchise (launched in 1982 with First Blood). Now, thanks to reader ‘nopr100,’ we know the title! Sylvester Stallone will be heading into one last fight with Rambo: Last Blood, which he also plans to direct.”

The Speculometron’s calculations: A rumor on a rumor! The first one, from June, had Stallone returning for a fifth Rambo, this one about everyone’s favorite preternaturally violent Vietnam veteran waging war against a “Mexican cartel.” This, at least, was a more appealing concept for a Rambo movie than the previously rumored Rambo V plot, which was leaked to the Internet back in 2009 and had Rambo tracking “a beast” that “was loose somewhere north of the Arctic Circle.” Rambo vs. The Thing!

Last month while promoting The Expendables 3, Stallone confirmed that a Rambo V was in the cards. According to Moviehole, at a press conference in France, the actor claimed he wanted to make “something a little classier than the usual actioner,” and compared the project to No Country For Old Men. Production company Millennium Films later posted additional confirmation on its Facebook page, saying the new Rambo would shoot in Shreveport this year.

So Rambo V is pretty much a done deal. But is the title Rambo: Last Blood? It certainly fits with the title of the original movie, First Blood, and with the idea to bring Rambo full circle in a more grounded, realistic character piece. If the whole No Country For Old Rambo thing is true, then why not call it Last Blood (beyond the fact that it’s kind of a silly title, and not an actual expression like “first blood”)? The Rambo franchise has a history of silly, borderline-nonsensical titles (like Rambo: First Blood Part II), so Rambo: Last Blood makes sense. And if Stallone decides to shoot yet another Rambo movie, he can always call that one Rambo: Last Blood Part II.