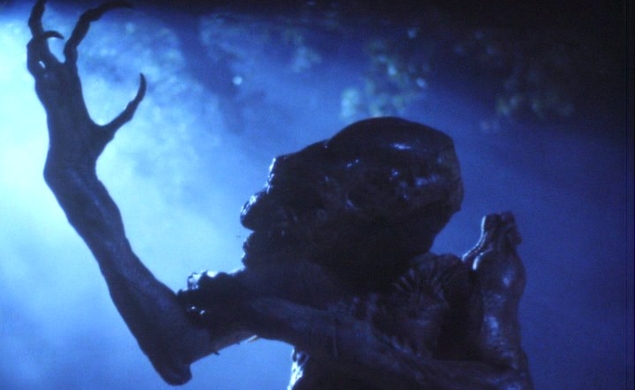 The late Stan Winston was a master of special effects and make-up, celebrated for his ability to bring realism to unrealistic creatures—including the spindly beast who terrorizes the countryside in 1988’s Pumpkinhead. Winston made his directorial debut on Pumpkinhead, and turned the design and puppetry of the title creature over to the employees at his effects studio, who made a monster as magnificent as Winston would’ve. It’s a villain like few others in horror: a demon who rises from the ground, shambling through the wilderness like sentient vegetation, roused to destroy human life at the behest of the vengeful. Winston put the beast against a backdrop like no other in horror at that time: an enchantingly lit, elaborately built set that makes Pumpkinhead look an old Universal horror picture had been transported into the 1980s from the 1930s.

Scream! Factory’s Blu-ray edition of Pumpkinhead does a typically fine job of telling the story behind the story, with featurettes that reflect on the spirit of creativity and nostalgia that went into making the film, as well as the sense of disappointment when it flopped at the box office, and the feeling of vindication when horror fans rallied around it later. Lance Henriksen, who plays the country store owner who calls on the demon to avenge the accidental manslaughter of his son, makes the point that since home video preserves these films forever, actors should feel more incentive to pursue projects like Pumpkinhead they can be proud of decades later.

Pumpkinhead doesn’t have the most original or complicated plot, and outside of Henriksen, the acting’s only fair. But the dialogue has some color, and the film as a whole is funky and handmade in a way that sets it apart from the more elaborate, effects-driven horror movies of the post-Nightmare On Elm Street era. Most importantly, it has that creature, which satisfies Stan Winston’s long-standing demand that his shop build characters, not props.