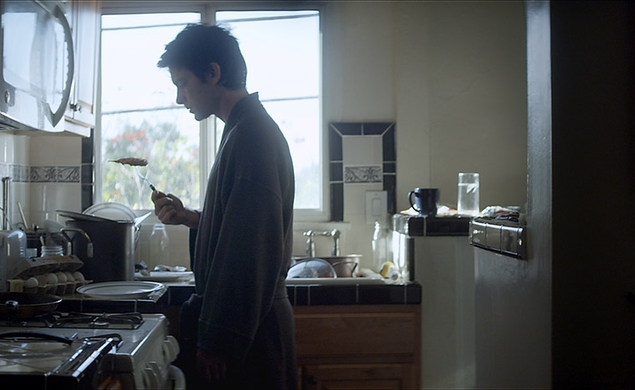 The Toronto International Film Festival’s Vimeo page mostly hosts trailers for movies playing at TIFF, but it also features several complete films from the fest’s various shorts programs. One of the best of that bunch is Alberto Roldán’s “everything & everything & everything,” from the International slate. Primer and Upstream Color writer/director/star Shane Carruth gives an unexpectedly comic performance as Morgan, a man so morose about the deep rut of his life that he overcooks his morning eggs, distracted by his usual hobby of staring out the window. And then Morgan discovers a a mysterious machine that produces fancy doorknobs, perpetually, for free. Soon, Morgan finds himself as the boss of a small but highly profitable doorknob-manufacturing concern; but because the machine operates at an unsteady rate, Morgan isn’t sure how long he can keep his new business booming.

“everything & everything & everything” is mostly a film about capitalism, showing how Morgan overextends himself, trying to maximize profit while he’s still got product to move. Morgan doesn’t derive any satisfaction from his success, because it doesn’t give him the same dreamy feeling that he gets from looking out the window. (In that way, “everything & everything & everything” resembles Mark Osborne’s classic animated short “More.”) Mostly though, this short is a nice showcase for Carruth, who could have a great future as a character actor if he weren’t such a talented filmmaker. As Morgan, Carruth is equally adept at buzzy business-speak and at looking sad, lost, and ennobled in a way by what he lacks. He’s an every-shlub.