Robert De Niro and Zac Efron will star in Dirty Grandpa, which, coincidentally, sounds a lot like Bad Grandpa 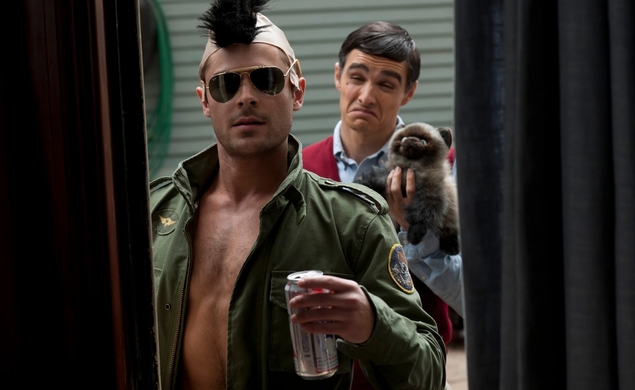 Robert De Niro has officially moved into the “vulgar old man” phase of his career. The star of The Godfather Part II, Taxi Driver, and Midnight Run just turned 71 last month, and mortality is increasingly creeping into his role choices. Last winter, he played a retired boxer who decides to get back in the ring one last time in Grudge Match, and next, according to Variety, he will co-star with Zac Efron in something called Dirty Grandpa from writer and director Dan Mazer, a frequent collaborator of Sacha Baron Cohen who co-wrote the screenplays for Borat and Bruno. Here’s how Variety describes the plot of Dirty Grandpa:

“Story follows an uptight guy (Efron) who right before his wedding is tricked into driving his vulgar former Army general to Florida for spring break.”

I’m assuming that the previous sentence leaves out the word “grandfather” between “general” and “to;” otherwise it would be awfully strange for a soon-to-be-married-man to ditch his bride to take a road trip with a foul-mouthed military officer. But maybe I’m wrong! Maybe Efron’s character spends a lot of time picking up veterans and driving them places. Who knows. It’s not my place to judge fictional people’s life choices.

Efron proved a surprisingly solid comedic co-star in this summer’s Neighbors, which essentially reversed the dynamic from Dirty Grandpa; there he played the vulgar former Army general of college frat boys, who squares off against an uptight couple (Seth Rogen and Rose Byrne) who live next door. He also dressed up like De Niro from Taxi Driver for one scene, which I’m sure will be a hilarious story he and De Niro can talk about on set. The timing of this project, just a few months after Jackass Presents: Bad Grandpa, which was also about a vulgar old man on a road trip with his grandson, made $150 million worldwide against a $15 million budget, is surely just an enormous coincidence.