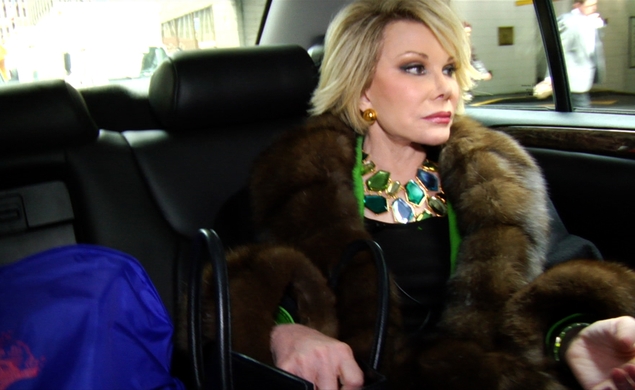 Joan Rivers, stand-up comedian, writer, actress, talk-show host, feminist icon, and all-around national treasure, has died, one week after having a cardiac arrest during a medical procedure on her vocal chords. She was 81.

Film was not Rivers’ dominant medium, but she made an impact on it all the same, most notably as the subject of the revelatory 2010 film Joan Rivers: A Piece Of Work. The documentary focused on Rivers’ remarkable resilience as a performer and as a human being, which allowed her to not only compete but to thrive as a brassy, crass, unapologetic woman in the male-dominated, often viciously sexist realm of stand-up comedy. It also touches on a series of tragedies in her life, most notably the suicide of her husband and partner Edgar, a trauma that, with signature chutzpah and unflappability, she turned into both a bestselling book (Still Talking) and the 1994 television movie Tears And Laughter: The Joan And Melissa Rivers Story, where she and her daughter (and frequent collaborator) Melissa relived that experience for television cameras.

But while Rivers was strong enough to blaze a trail for boundary-pushing female comedians, she also never lost a fundamental vulnerability and humanity that made her relatable despite the Shakespearean twists and turns of a remarkable life. When I interviewed Louis C.K. a few years back, he talked extensively about his admiration for Rivers’ work ethic and strength, but was particularly moved by her ability to overcome things that would crush lesser souls. C.K. said of Rivers and particularly A Piece Of Work, “The thing that kept getting me in the movie was that every hard thing that happened to her, like her husband killing himself, and all of the losses she suffered, when she would describe them, she would say, ‘That was really difficult.’ She never said, ‘That killed me.’ The kind of things that people say. ‘I was overcome by that. That was too much.’ She would just say, ‘That was difficult.’”

Rivers’ life was full of difficulty; such is the lot of the pioneer. As she relays in A Piece Of Work, Rivers thought of herself as an actress as much as a comedian, but that is not how the world saw her, and the roles she played in television and movies almost invariably were that of “Joan Rivers” or a decidedly Joan Rivers-like figure. She was an early cast member of the Second City in the 1960s, but her gifts were as a soloist, not a team player, and she began making a name for herself in the mid-1960s as one of the few prominent female comics on television. Rivers’ legacy will forever be associated with that of Johnny Carson, who took a shine to the brassy comedian and mentored her through the years. She was a popular guest and a regular guest host on The Tonight Show, whom many saw as a potential successor to Carson until their previously charmed relationship went ice-cold when Rivers took a position hosting her own talk show on Fox. Rivers was frozen out of Carson’s inner circle, and he famously never spoke to her again.

This agonizing professional divorce from one of the most powerful and beloved figures in all of entertainment would be enough to destroy most people, particularly when followed by the suicide of Rivers’ longtime husband and producer Edgar. But Rivers proved ingenious at reinventing herself professionally, first as a sharp-witted and often hilariously mean chronicler of red-carpet faux pas for the E! network, and then as stand-up comedy’s elder stateswoman. A Piece Of Work reinvented Rivers yet again and spurred a late-in-the-game professional renaissance that at one point found her making out with Louis C.K. on his own groundbreaking show, Louie.

Rivers did write and direct a movie, the 1978 male-pregnancy comedy Rabbit Test, starring a young Billy Crystal as the world’s first pregnant man, but out of respect for the dead and the film’s unavailability, the less said about that the better. She made a much better impression with her screenplay (with Agnes Gallin) for the 1973 television movie The Girl Most Likely To…, a revenge fantasy about a homely girl (played by Stockard Channing) who kills men who have wronged her once she becomes a beauty, and with movie appearances like the robot Dot Matrix in Spaceballs. Still, she was most at home where she could talk directly to the public in that unique voice: brash, funny, bold, unashamedly vulgar, and above all else, honest.

Today the Age Of Joan has ended, and while pop culture is full of her artistic progeny, from Sarah Silverman to Julie Klausner, we will not see the likes of her again. She has uttered her catchphrase, “Can we talk?” for the final time, and the world of comedy is filled with a sad silence in her absence.