Joshua Oppenheimer’s sequel to The Act Of Killing now has U.S. distribution 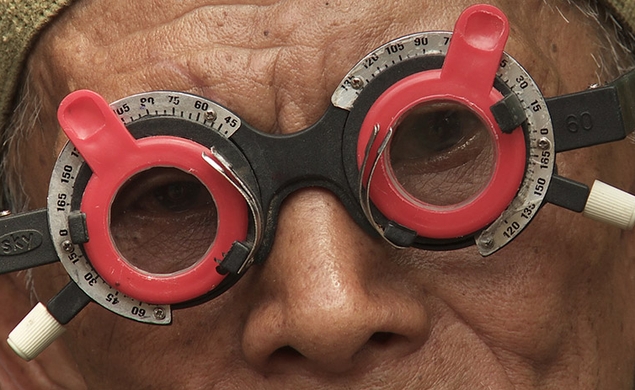 Two years ago, Joshua Oppenheimer’s documentary The Act Of Killing came seemingly out of nowhere to become the most talked-about doc of the fall festival season, after audiences at Telluride and Toronto were stunned by Oppenheimer’s boldly cinematic recreations of Indonesian genocide. The movie carried that momentum into a 2013 theatrical release, which was handled in the U.S. by Drafthouse Films, and it ultimately landed an Academy Award nomination.

Over the next couple of weeks, we’ll know a lot more about Oppenheimer’s follow-up to The Act Of Killing, called The Look Of Silence, which is due to debut at the Venice Film Festival tomorrow, followed by screenings in Telluride (presumably) and Toronto, and then an appearance at the New York Film Festival. (I say “presumably” because Telluride hasn’t announced its schedule yet, but since The Look Of Silence is listed by the Toronto fest as a “Canadian premiere” and not a “North American premiere,” and since it’s playing the second week of TIFF, it’s safe to assume that a Telluride slot is confirmed.)

Here’s what we know about The Look Of Silence right now: It explores the same genocide as The Act Of Killing, but from the point of view of the victims’ families (as described in some detail by Oppenheimer to me when I interviewed him earlier this year); and it also is being released in the U.S. by Drafthouse, which announced its acquisition today. In the press release, Drafthouse’s Tim League said, “When I watched The Act of Killing, I thought I might not ever see another documentary quite as powerful. Joshua Oppenheimer’s stunning new film, The Look Of Silence, is resounding proof that I was wrong.” As with The Act Of Kiling, documentary greats Werner Herzog and Errol Morris are serving as executive producers on The Look Of Silence. Morris is quoted in the press release as saying that the new film is, “One of the greatest and most powerful documentaries ever made. A profound comment on the human condition.”

Drafthouse is partnering with Participant Media on the release, which is currently scheduled for the summer of 2015. I’ll be seeing the film on my last night at TIFF, Wednesday September 10, and will have a write-up as part of The Dissolve’s festival coverage.