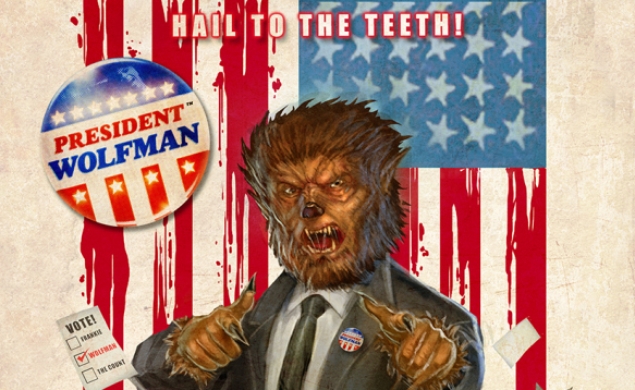 “Found footage” is so last year. More micro-budget filmmakers should try making a “recycled footage” movie, like Woody Allen did with What’s Up, Tiger Lily?, and like Craig Baldwin has done with films like Tribulation 99: Alien Anomalies Under America. Mike Davis’ 2012 horror-comedy President Wolfman is an especially nutty new addition to an underpopulated genre. Using public-domain B-movies and industrial films—and borrowing heavily from the 1973 Dean Stockwell vehicle The Werewolf Of Washington—Davis tells a story about a lycanthropic American president whose bloodlust makes him just the right man to stop Congress from selling the entire country to the Chinese. Davis then pads the plot out with scenes of doped-up middle-age swingers and nods to blaxploitation (including a funky theme song). The result is a freewheeling roll through political satire, exploitation shocks, and raunchy humor, all as flippant and as unsubtle as an issue of Zap Comix.

Like a lot of artist/comedians who scribble over other people’s work, Davis goes too easily to the dirtiest or most offensive joke, making President Wolfman come across as sophomoric much of the time. But then the movie will throw in a random appearance of Smokey The Bear, or footage of live birth, and it’s hard not to nod appreciatively at Davis’ commitment to keeping viewers on their toes. And the movie has some legitimately funny gags—beginning with the wobbly FBI warning at the start of the movie, which warns that pirates will face the wrath of President John Wolfman. President Wolfman has some fun with the 1970s-ness of its footage (at one point, a character gripes, “Who the hell uses a phone booth these days? I should throw you in jail just for that!”), but the project’s overall attitude is nostalgic toward the faded colors and ugly clothes of forgotten old films. Throughout, Davis tries to stay true to the spirit of his made-up company, Stag-O-Vision: “No lights, no camera, all action.”