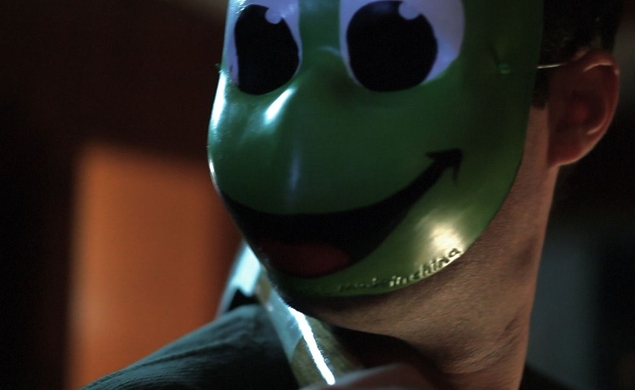 Doug Mallette’s trippy cult-comedy-in-the-making Worm has a strong premise that the director doesn’t waste. (If anything, Mallette damn near wrings it dry.) Set in a near-future world where people insert psychotropic worms in their ears to induce a dream-filled sleep, Worm stars John Ferguson as Charles, a lonely apartment complex handyman who copies whatever his handsome, successful neighbor Reed (Shane O’Brien) does. But when Charles can’t afford to buy the “premium” version of the Fantasites dream-worm, he starts secretly swapping his “economy” Fantasites with Reed’s better-quality worms. Soon, Charles is having outstanding adventures in his mind every night, while Reed’s brain is literally turning to worm-shit.

Worm originated as a 12-minute short—made in two days as part of a “48 Hour Film” experiment—with exactly the plot above. In the feature-length version, that first part of the story has been expanded to nearly 45 minutes, after which there’s a new development: The government, concerned about the side effects of Fantasites, starts tightly regulating their sale and distribution, which creates a population of strung-out dream-addicts, willing to do anything for a fix. One of those addicts is Reed’s girlfriend, June (Jes Mercer), who strikes up a friendship with Charles that may be all about getting access to Charles’ stolen supply. Mallette tells the story of these three people via a mix of awkwardly funny scenes, surreal fantasy sequences, and snippets of TV news broadcasts, talk shows, sitcoms, and commercials.

According to Mallette (and the credits), Worm was shot without a script, with the cast improvising not just the dialogue but a good deal of the story. As a result, the further Worm gets from the short’s plot, the more aimless and repetitive it becomes. But Mallette’s cast is unusually sharp for such a low-budget feature, with Ferguson in particular giving a terrific performance as a sad-sack sweetheart who’s just trying to fit in. Everything that Worm means to say about marketing, addiction, and class divides is all written on Ferguson’s face when Charles is smiling too eagerly at Reed and June, trying to pretend that he belongs.