After Midnight: The Suspect 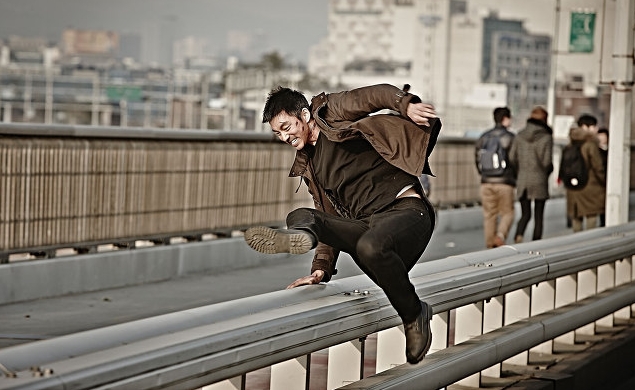 The homogenization of global cinema is troubling, and yet there’s something fascinating about seeing one culture’s style of moviemaking become absorbed and replicated by another—because the process often reveals what’s essential about the style and the culture. South Korea has seen a mini-boom in spy thrillers over the past few years: not cloak-and-dagger pictures of the campy 1960s kind, or the wonkier 1970s and 1980s version of espionage, but rather movies in the mode of The Bourne Identity, with frenetic action and heroes caught between disturbingly amoral government agencies. Director Won Shin-yan’s The Suspect (written by Im Sang-yoon) is one of these South Korean Bourne clones. Gong Yoo plays a North Korean secret agent named Ji Dong-chul, who gets left out in the cold when the regime changes, and loses his wife and daughter in the process. Ji escapes to South Korea, where he works undercover to find the person responsible for all of his troubles; but then a South Korean spy frames Ji for murder, and he finds himself on the run from the good guys and the bad guys, fighting his way through the streets of Seoul and beyond.

The Suspect is overstuffed with plot, with something crazy and narrative-wrenching happening to Ji roughly every 10 minutes. (And this a movie that runs for nearly two and a half hours.) But it’s so slickly made and action-packed—with a vertigo-inducing rock-climbing sequence, car chases through narrow streets, and jaw-dropping physical stunts—that aside from the cast, The Suspect could pass for a Hollywood movie. Even the setting doesn’t set The Suspect apart, since Hollywood is increasingly shooting overseas, for the tax breaks and to court foreign markets. What distinguishes The Suspect is what it’s about: the perils of being a Bourne or a Bond in a region where a Westernized nation and a dictatorial regime sit side-by-side. The Suspect is mostly just a solidly exciting action picture, but it generates an unusual friction when all of the running through traffic and leaps from great heights are set against the backdrop of the transfer of power from Kim Jong-il to Kim Jong-un. The stunts are still preposterous, but the hero’s desperation is not.