Coolness: Frank (a.k.a. Michael Fassbender) sings on The Colbert Report 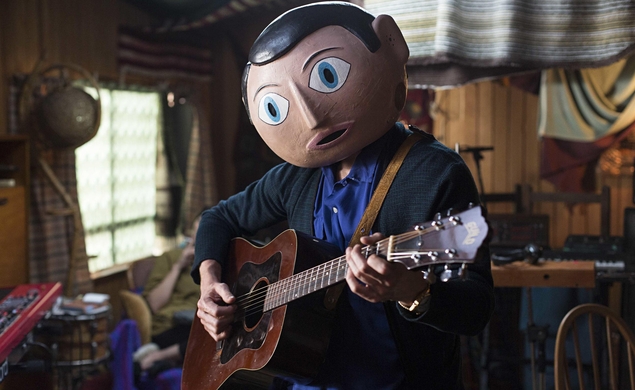 Next week, the strange, funny, and curiously beautiful film Frank opens in select cities, following up on its smashingly successful launch at Sundance back in January of this year. Directed by Lenny Abrahamson and written by Jon Ronson and Peter Straughan, Frank stars Domnhall Gleeson as an aspiring singer-songwriter/celebrity who hooks up with an off-putting art-rock band called The Soronprfbs, and finds himself warring with the band’s sellout-averse keyboardist (played by Maggie Gyllenhaal) as he tries to make a star out of the masked frontman, Frank (played by Michael Fassbender, beneath an enormous fake head). As part of the promotion for Frank, Fassbender, Gleeson, and Gyllenhaal recently performed as The Soronprfbs on The Colbert Report, singing one of the movie’s most important songs, “I Love You All.” Here’s the performance, complete with Colbert intro (and unskippable ad, sorry):

Having seen and enjoyed Frank greatly at Sundance, I found the above video not just delightful, but haunting, because I remember how “I Love You All” is used in the movie’s highly emotional final minutes. For those who haven’t seen Frank, I don’t know how much of an enticement this video will be, because the song is weird, and there’s nothing in its performance to get across the complex relationship of the three leads. My advice: Watch the clip, then go see Frank as soon as you’re able, then come back to the clip. What may look odd and overly precious now will potentially be a lot more devastating after you know the context.