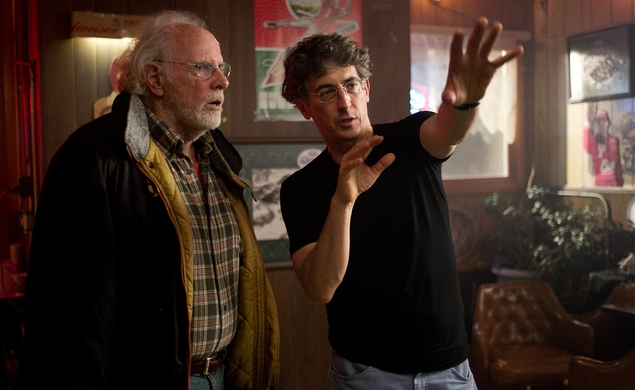 Last fall, Alexander Payne said at a press conference that despite his desire from the very beginning to shoot and screen his film Nebraska in black-and-white, the executives overseeing the project demanded he make another version in color as well. Although they had no problem with him making a black-and-white movie, Payne said, they needed a color cut because of “television deals around the world which stipulate, ‘only color.’” Shooting in black-and-white precluded the film from a significant portion of its TV income, so Payne reluctantly agreed to make a color Nebraska just for the specific TV outlets in “Moldova and Sierra Leone and Laos” that demanded it. “I hope,” Payne added, “no one ever sees it.”

Uh, yeah; about that. The multi-platform movie channel Epix must have a headquarters in Moldova or something, because despite Payne’s wishes, they’re airing the color Nebraska this coming Sunday. They’re even promoting it as a special event. Here’s the pertinent ad copy for the screening (which you can watch on Epix’s official website, which even bills the night as “the World Color Première”):

“Experience Alexander Payne's masterful black-and-white vision, and for the first time, Epix brings you the full color version for a limited time showing. See Nebraska in two totally different states. Sunday at 8 p.m., followed by the world première of the color version, exclusively on Epix. We get big movies.”

Thompson On Hollywood’s  Tom Brueggemann spoke with Nebraska producer Albert Berger, who said he had no prior knowledge that Epix was showing the color version of the movie, and that “to his knowledge Payne was also unaware.”

I don’t have Epix, but I must confess that if I did, I would be DVRing the color Nebraska. I’d feel guilty as hell about it, but I would do it. I really liked the film in black-and-white—it just missed my top 15 of 2013—and hate when a film is shown in a form its director didn’t intend  (at least outside of Moldova). But that doesn’t mean I’m not morbidly curious about the results anyway.

It’s not as if someone went in and artifically added color to the film in an editing room somewhere; that would be a disgrace. As Payne told Coming Soon, Nebraska “was shot digitally so it exists in color” at the flick of a switch. Even though it was “designed” and “lit” for black-and-white, Payne himself even called the color version of the movie “really beautiful.” It actually would be sort of fascinating to watch both versions back-to-back, the way Epix is showing it, to compare the emotional impact of the film with and without color. I feel kind of bad even saying that, but that’s how I feel.