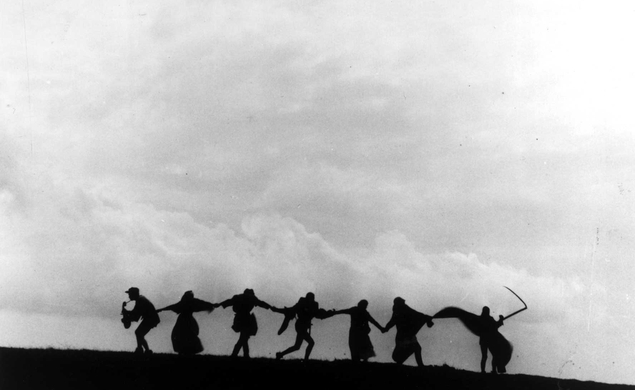 Foreign-language films had made their way to the United States periodically in the early sound era, but it was really after World War II that the American arthouse circuit became more firmly established in big cities and college towns. From the late 1940s through the late 1960s (when domestic art-cinema began to flourish), stateside audiences learned to appreciate different approaches to movie-making via the Italian neo-realists, the French New Wave, and one-of-a-kind directors like Akira Kurosawa, Federico Fellini, and Ingmar Bergman. Tonight, beginning at 8 p.m. Eastern, Turner Classic Movies will be screening six consecutive Bergman films, covering the decade in which he became an international cinema star. Beginning with Bergman’s first big hit, 1955’s sophisticated romantic comedy Smiles Of A Summer Night, the evening continues with his two 1957 masterpieces Wild Strawberries (at 10) and The Seventh Seal (at 11:45), with the former a stream-of-consciousness trip through the problematic personal life of a distinguished professor, and the latter a heavily allegorical film about a knight playing chess with death. The last three films in the program are more challenging, making up Bergman’s loose trilogy about faith: 1961’s Through A Glass Darkly (at 1:30 a.m.), about a family dealing with a mentally unstable member who claims to have seen God; 1962’s Winter Light (at 3:15), about a country priest considering quitting; and 1964’s The Silence (at 4:45), about two very different sisters who endure each other’s company on a long road trip in a foreign country. These films all captivated audiences worldwide with their mature themes, allusive storytelling, intense performances, and luminous images, while awakening Bergman’s peers and followers to new possibilities in cinema.