The seas parted, and the Exodus: Gods And Kings trailer appeared 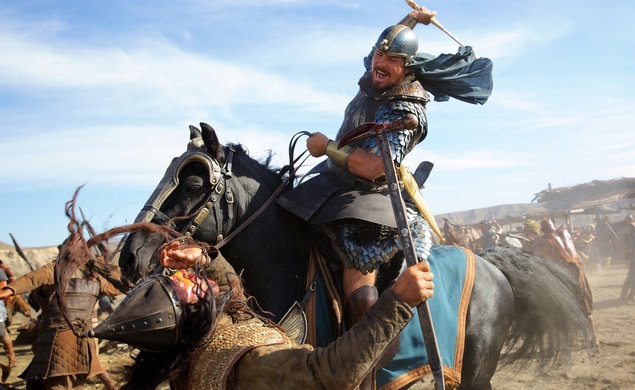 True story: A few years ago, Russell Crowe and Ridley Scott tried to make a sequel to Gladiator, their 2000 blockbuster that went on to win the Academy Award for Best Picture. There really was just one problem with their plan: Maximus, Crowe’s character, (SPOILER ALERT) bit the big one at the end of the first film. Crowe actually got Nick Cave to write a script for Gladiator 2 that involved the Roman gods resurrecting Maximus and sending him back to earth to kill Jesus Christ. (No, really.) Eventually, someone came to their senses and put a stop to the whole thing, but this year both Crowe and Scott have separately returned to the ancient world to scratch their itch for more tales of swords and sandals. Crowe played Noah in Darren Aronofsky’s reimagining of the classic Bible story, and Scott has Exodus: Gods And Kings, his new version of the tale of Moses leading the Jews from Egypt and the evil Pharaoh, with Christian Bale as the Hebrew leader and Joel Edgerton as Yul Brynner. Here’s the film’s first trailer:

The trail of the tape
Title: Exodus: Gods And Kings
Director: Ridley Scott
Screenwriter: Steven Zailian
Cast: Christian Bale, Joel Edgerton, Aaron Paul
Release date: December 12, 2014
Suggested alternate title: Gladiator 2: Blood In The Water
The entire trailer in one line of dialogue: “Something is coming that is out of my control.”
The entire trailer in one screengrab:

What was the last really great Ridley Scott movie? Black Hawk Down? Gladiator? Blade Runner? And yet we still treat each of his movies as a major event. Certainly Scott has made some memorable films, and I don’t doubt he’s capable of doing it again. But I’m not sure I’d stake my bank account on Exodus: Gods And Kings being his return to glory. I fear we have made Scott into a Golden Idol, and while we were busy worshipping him, God’s been chilling up on Mount Sinai gearing up to smite us (cinematically speaking).