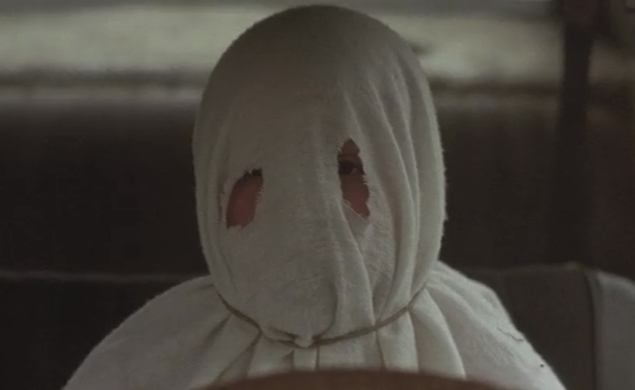 The slasher genre had its heyday in the early 1980s, when major studios and indies alike were pumping horror movies out in bulk—and when the dominant style was still heavily beholden to Halloween and the first Friday The 13th, with deep shadows, gory kills, and nerve-wracking tracking shots. Part of what makes that era so enjoyable for horror fans is the way movies from back then tend to be a mix of the formulaic and the quirky, with films from the latter category often adhering to some of the rudiments of the genre before spinning off into the bizarre. This week, specialty home-video company Severin is releasing two of the more eccentric 1981 slashers on Blu-ray: Bloody Birthday and Bloody Moon.

Writer-director Ed Hunt’s Bloody Birthday is notable for two reasons: Not only is it a slasher, but it’s also an entry in the “killer kids” sub-genre, and the vast majority of the film takes place in broad daylight. The villains are a trio of sweet-faced grade-schoolers, all born at the same time during a rare astronomical event. When they get tired of hearing the adults in their life tell them no, the children stage elaborate “accidents” to get rid of the people standing in their way. When the traps don’t work, these kids just shoot, stab, and beat the hell out of grown-ups. They also kill some folks for no real reason; and they go after classmates, too. (The group’s ringleader, Debbie, tells one boy that she doesn’t play doctor but that, “I know how to play ambulance.” And then she tries to push him out of treehouse onto a sharpened stick.) Between the placid suburban setting, the dogged ordinariness of the murderers, and the lengths these homicidal tots go to, Bloody Birthday is too goofy to be scary. But it’s thick with campy dialogue and memorable scenes, including a long sequence where Debbie charges her accomplices a quarter to look through a peephole while her older sister (played by comedian Julie Brown!) dances naked in front of her bedroom mirror.

Bloody Moon, meanwhile, is a fan favorite because it was directed by Jess Franco, the prolific Spaniard exploitation filmmaker best-known for his stylish Eurotica and quasi-classy gothic horror. Bloody Moon is Franco’s “Sure, why not?” stab at keeping up with contemporary genre trends. Set at the “International Youth Club Boarding School Of Languages,” Bloody Moon is sort of about a disfigured man who’s driven to violence by his lust for his sister, and is sort of about a young woman who witnesses a series of grisly crimes but can’t get anyone to believe her. But it’s mostly about Franco doing his take on the American slasher, which turns out both very European and very kinky. The movie has too many off-the-wall death scenes to tally up, but its most infamous involves chains, a concrete slab, an industrial buzzsaw, and the one of the fakest-looking heads in the history of trash cinema.

Both of the Severin Blu-rays add fairly in-depth interviews with the movies’ directors, while Bloody Birthday also adds the 15-minute featurette “A Brief History Of Slasher Films,” which offers a useful overview of where the genre came from, and how it quickly flourished and faded. The mini-doc is made to look like it was duped off an old videotape with bad tracking, and it makes a strong case that the horror fans of the early 1980s liked their slasher movies to be as conventional as possible, and punished films that deviated by staying away from them. That’s almost the opposite of the way fans feel now about those older movies: the odder, the better.

[Incidentally, Severin is releasing a third cult-horror film on Blu-ray this week: Ted Post’s truly bizarre 1973 freak-fest The Baby. But that movie demands more attention, so I’ll have a full review of it in the main DVD/BD section next Monday.]