Feedback: When the screen becomes a mirror 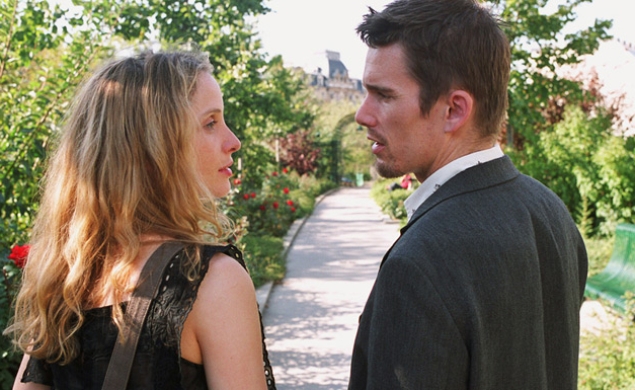 In our 5-10-15-20 with director David Wain last week, the They Came Together director talked about seeing Richard Linklater’s Before Sunrise when he was in his mid-20s, saying:

“I felt like it was so true to things I had been through on both sides. It was one of those times where you’re like, ‘I think I know these people. I’ve been there. They’re showing what life is really like.’ It’s not referring to stories or movies—this is life. And then the fact that they went on to tell that story every nine years just really kills me. It kills me… I went to see the last one [Before Midnight], and I now have kids, and they now have kids. It’s just so intense. In fact, I went with my wife to that one, and there are these completely terrifying moments of, ‘Oh my God… Did they have a camera in our bedroom and write this down?!’ They really are a marker of lives.”

In the comments, The Manipulator sounded an amen:

“The whole discussion about what age you are when you see one of the Before movies really hits home for me. I never got around to Before Midnight last year, but I watched it a couple weeks ago and it absolutely floored me. I know there was a lot of love for it around here, but I would put it in the top 10 movies of the last few years. The way it expands their world was totally unexpected, and deeply moving. It seemed like a huge leap forward from the first two, even as it’s continuing that story, and I think why is because of the fact that I’m 38, so fairly close to their ages. I don’t have kids but otherwise I can totally relate to what’s happening in a way that I can’t with the other two films anymore. It hit me at just the right time.”

“Yeah, I watched Before Sunrise a year ago, at basically the exact right time in my life (my 20s). When I first started watching it I was a little resistant to it, but once Delpy started talking about her fear of flying I got this similar, ‘Did they record my thoughts?’ feeling like Wain talks about. I was struck by the film for the rest of its runtime, in a way I had never been before with a movie and haven’t quite been since.”

I too saw Before Sunrise in my mid-20s—I was 24, to be exact—and at the time, I strongly disliked it. I found Jesse insufferable, and Céline reminded me of some of the “too cool for everything” folks I used to hate when I went out to bars and rock clubs back then. In a way, the movie was too familiar, in that Linklater was accurately depicting people I already knew, and whom I generally tried to avoid. It wasn’t until I fell hard for Before Sunset a decade later that I went back to Before Sunrise, and found that I’d been way too ungenerous towards it. I don’t know if reuniting with Jesse and Céline in their 30s had changed my perception of them in their 20s, or if I’d just grown out of my knee-jerk annoyance toward navel-gazing post-grads. I just know that I found the pair more poignant and lovable once I was no longer their age.

I’ve always been fascinated by how people react when they see something in a movie that reflects their own lives. I’m not just talking about an astrophysicist watching Gravity, or a family touched by cancer watching The Fault In Our Stars, but someone seeing a version of themselves or their acquaintances on the big screen. Are we more inclined to like such a film, because we’re flattered by the recognition? Or do we recoil?

I’m going to be interested to see what non-critics think of Linklater’s Boyhood for that reason, because so much about it is going to seem familiar to so many people, and for a variety of reasons. Because Linklater very purposefully fills the movie with signifiers of the 2000s, he’s bound to spur a few nostalgic pangs; but Boyhood also contains scenes of everyday life that will undoubtedly resonate with adults recalling their own childhood and/or their own children. And I suspect viewers will connect with different parts of the film, depending on their own life experiences.

“Relatable” is one of those terms—like “likable,” or “humane”—that I’ve seen some critics turn against lately, because it comes across as a proscriptive value-judgment. If I say that I enjoyed a movie because I could relate to it, or because the characters were good people, am I saying that I can’t enjoy a movie if its about flawed people from alien cultures? In my case, the answer is “no.” Just because I like a story that’s relatable doesn’t mean I automatically dislike one that’s not. (I don’t relate at all to Scarlett Johannson’s character in Under The Skin, or to the heroine of Lars von Trier’s Nymphomaniac, and those are two of my favorite movies of 2014 so far.)

But I think it’s human nature to go looking for something recognizable when we watch movies—and especially when we’re watching movies from foreign countries, or that are about people in our own country whom we rarely meet in real life. That’s part of how cinema shrinks the world, by showing, for example, that a pre-teen girl in Saudi Arabia has aspirations that we’ve seen in ourselves. And when the picture onscreen is so familiar that it’s like looking into a mirror? Well, that’s when we learn how comfortable we are with how we look.