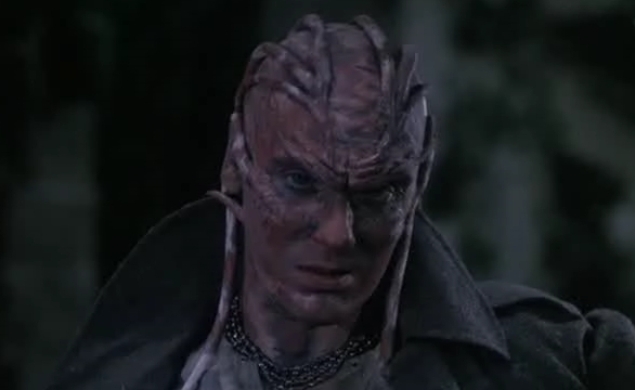 English horror maestro Clive Barker belongs to the ages, as the creative force behind flesh-mutilating bonanza Hellraiser (as well as the second, third and fourth entires in the nine-film franchise). But in 1990, Barker created another traumatizing account of demonic forces hiding in unlikely corners of our world. Adapted from Barker’s own novella of the same name, Nightbreed tells the story of Aaron Boone (Craig Sheffer), a mental patient who believes he moonlights as a serial killer after his nefarious doctor (played, hilariously, by David Cronenberg) deceives him. Boone escapes the facility and finds solace with a tribe of monsters similarly escaping a human society that fears and loathes them.

It was something of a passion project for Barker, who described his aim to Fangoria in an 1989 interview as “to make the Star Wars of horror films.” All the more dispiriting, then, when production studio Morgan Creek and distributors 20th Century Fox did to the film what Pinhead does to those foolish enough to unlock the Lament Configuration, and tore it apart, only to piece it back together into a ghastly and unrecognizable shape. Morgan Creek made extensive, flesh-searing edits on what Barker thought was a finished product and 20th Century Fox marketed it as a straightforward slasher film. It did poorly with critics and the box office alike, and seemed doomed to fade into relative obscurity. Over the years, Barker has been vocal about his disappointment in the fate of the film. All the while, a passionate cult (including Chilean auteur/madman Alejandro Jodorowsky, who called it “the first truly gay horror fantasy epic”) devoted to the movie has developed and demanded that the film be re-released in Barker’s vision.

After 25 long years, they’re finally getting their wish (although anyone who has seen the Hellraiser films knows what happens to people who make wishes in Clive Barker’s world). Scream! Factory will release a Director’s Cut of Nightbreed on Blu-Ray and DVD on October 28. Scream! Factory states in a press release that nearly an hour of lost footage has been securely recovered, and that this new release will finally bring one of horror cinema’s lost masterpieces to hungry devotees. Here’s the official statement from Barker himself:

“This is film history and beyond my wildest dreams of realization. When Scream! Factory told me that they found the Nightbreed film footage I was gob-smacked! This is the ultimate validation of choices made by myself and Mark Miller [of Seraphim Films] all the way back in 2008. As we embarked down the road of attempting to track down the lost footage, we looked at each other and said, ‘Maybe one day they’ll find it.’ It’s my pleasure to announce that the day has come.  … There’s never been a reconstruction that’s had as little chance of succeeding and yet has succeeded on as many fronts as this film has. It’s unprecedented. To now have a movie that we can put together in the way that I fully intended it to be seen when I first set out to make this film in 1989 is extraordinary.”

At last year’s Comic-Con, at the Scream! Factory panel, when the news of the Nightbreed restoration project was announced, the audience erupted. It’s good to see that Barker and Scream! Factory were able to put the movie back together so quickly, for what should be a nice Halloween treat.