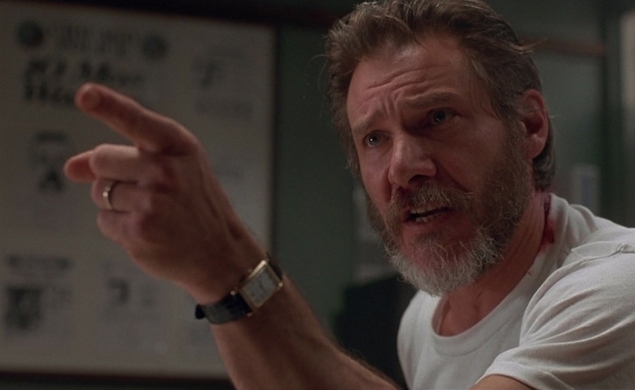 According to our own Nathan Rabin, Harrison Ford (and co-star Gary Oldman) are the new film Paranoia’s “sole redeeming aspect.” “Ford seems to be enjoying himself playing a man whose outer folksiness conceals inner ruthlessness,” Rabin says, “and it’s fun watching these two old pros have at it.”

I haven’t seen the movie yet myself, but the phrase “two old pros have at it” fills me excitement at the thought that Paranoia might give Ford the opportunity to utilize one of his favorite onscreen tricks: The Indignant Finger Point. It comes in a scene where someone is doing something Ford doesn’t like. He scowls. He growls. And then: The Indignant Finger Point! Gets ’em every time.

As this very funny supercut from Conan shows, Ford has been living off The Indignant Finger Point for decades:

It’s nice to see Ford himself having a laugh at his own expense; for a guy with a reputation for grumpiness, he’s a surprisingly good sport. (Actually, Ford has a history of playing along with Conan, including in the all-time classic bit about his “Harrison Ford Intense Face” from the Late Night days.)