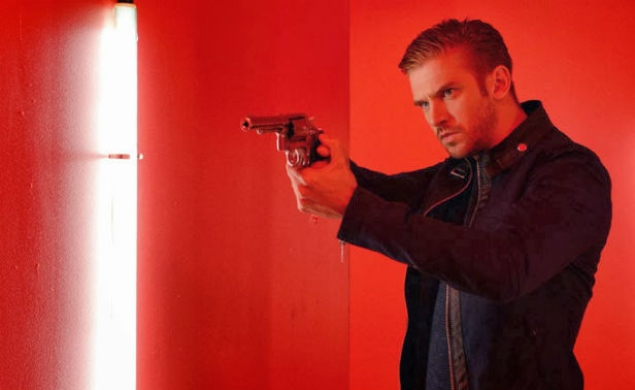 One of my favorite movies at Sundance this year was The Guest, written by Simon Barrett and directed by Adam Wingard. (The latter is best-known for the home-invasion horror favorite You’re Next.) Visually, The Guest is an homage to John Carpenter’s cleanly composed thrillers, but with a slightly different tone. Dan Stevens—formerly the star of the popular British historical soap opera Downton Abbey—gives a revelatory performance as David Collins, a super-cool super-soldier who arrives at the rural home of a dead Army buddy, and offers to do whatever he can to help his friend’s family, the Petersons. But before long, the Petersons learn that while David gets results when he sets out to change people’s lives, his methods are highly problematic.

IGN is hosting The Guest’s first teaser trailer, which gives a little taste of the movie’s style, and Stevens’ presence.

In my Sundance review of The Guest, I wrote:

“I wasn’t a fan of Wingard’s You’re Next, and The Guest didn’t exactly convert me into a Wingard-booster. But I do love that the movie keeps opening up, expanding from one small-town farmhouse to encompass a secret military base and a high school ‘Halloween maze,’ where the final showdown takes place. And did I mention Dan Stevens? Because Holy B. God, is he ever a hoot. He gives one of those iconic badass performances—like Patrick Swayze in Road House—that’s all arched eyebrows, plastered smiles, smoky gazes, and cool dialogue delivered laconically.”

At just under a minute, this trailer for The Guest can only hint at what the movie has to offer. But man, just take a look at that Dan Stevens—so charming, so dangerous. I suspect The Guest is going to help make him a bigger star here in the U.S., and this teaser does give a glimpse at what makes his performance one of 2014’s best so far.