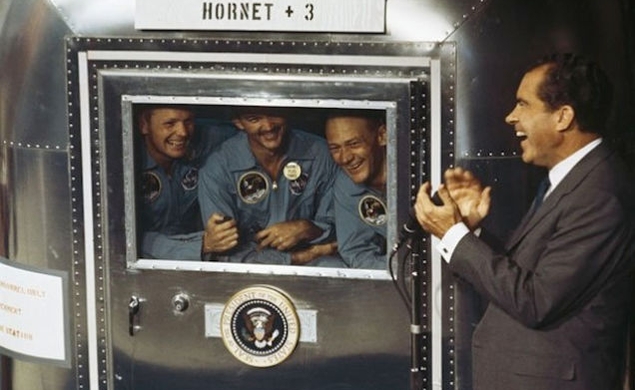 According to Variety, FilmNation Entertainment has signed Tate Taylor to direct In The Event Of A Moon Disaster, based on Mike Jones’ script, which previously made “The Black List” of best unproduced screenplays. Jones wrote the script in 2011, and sold it to FilmNation that same year. Taylor, who had a sizable hit with his 2011 adaptation of The Help, a novel written by his friend Kathryn Stockett, just finished working on the James Brown biopic Get On Up, due out this August. The current plan is for Taylor to begin shooting In The Event Of A Moon Disaster early next year. The casting process is already underway.

What kind of roles will Taylor and FilmNation be looking to fill? That’s where this story gets more interesting. In The Event Of A Moon Disaster is described as a kind of “alternate historical drama,” inspired by the discovery in 2009 of a speech William Safire wrote for President Richard Nixon to deliver, had the Apollo 11 mission gone awry. Just how “alternate” will Jones’ version of history be? That remains to be seen, but judging by Jones’ own Tumblr, he originally set out to tell the story straight, then realized he could make it more compelling if he ditched the facts and tried to serve the drama. In other words: This doesn’t appear to be a fantasy or science-fiction project, but rather a reality-based drama from a slightly modified reality.

As for that Safire speech, it’s powerful stuff. The text is below:

Fate has ordained that the men who went to the moon to explore in peace will stay on the moon to rest in peace.

These two men are laying down their lives in mankind’s most noble goal: the search for truth and understanding.

In their exploration, they stirred the people of the world to feel as one; in their sacrifice, they bind more tightly the brotherhood of man.

In ancient days, men looked at stars and saw their heroes in the constellations. In modern times, we do much the same, but our heroes are epic men of flesh and blood.

Others will follow, and surely find their way home. Man’s search will not be denied. But these men were the first, and they will remain the foremost in our hearts.

For every human being who looks up at the moon in the nights to come will know that there is some corner of another world that is forever mankind.