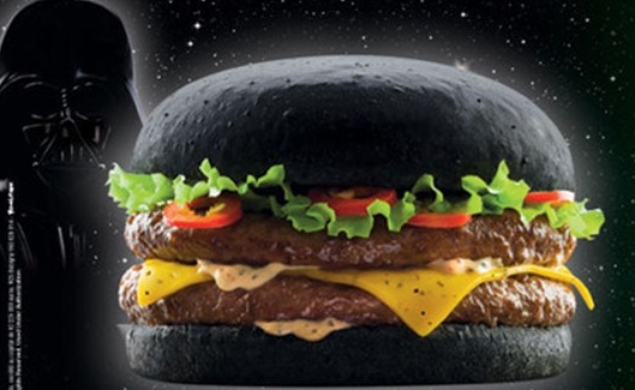 Last week’s “Adventures In Licensing” column on limited edition X-Men: Days Of Future Past Twinkies brought back memories of the many, many times that producers of big tentpole movies have struck deals with restaurants and food manufacturers to produce branded snacks and meals. Sometimes these foodstuffs have just been ordinary candies, cereals, and such, molded into new shapes and poured into new boxes. Sometimes the branding has been more creative—to the point of becoming mind-bogglingly bizarre. Serve yourself up a couple of Star Trek Eggos and get ready to read about five products that represent the full range of movie/food creativity. 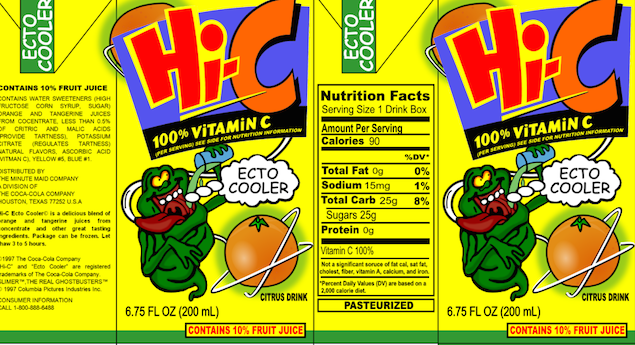 The champagne of movie tie-in beverages was technically a television tie-in, connected to the animated series The Real Ghostbusters and its popular spectral hero Slimer. But without the original films, there would be no Ghostbusters or Slimer, so we’re allowing it in with an asterisk. In deference to the nasty little spud, this tangy citrus-flavored beverage was colored a sickly, unnatural green. The hideous hue might have turned off rational-thinking adults, but children guzzled the beverage down by the gallon (this was also the era when Nickelodeon and its slime reigned supreme on basic cable, and Ecto Cooler and its gunky connotations also fed a demand for slimy beverages). Ecto Cooler outlived The Real Ghostbusters by almost half a decade, and even after the Ghostbusters license left the product, Hi-C continued to market it under names like Shoutin’ Orange Tangergreen and Crazy Citrus Cooler until the mid-2000s. Maybe the only reason to actively root for a Ghostbusters III is the possibility that someone might bring Ecto Cooler back on the market as a retro tie-in. In the meantime, recipes exist online if you want to attempt to make your own Ecto Cooler homebrew. 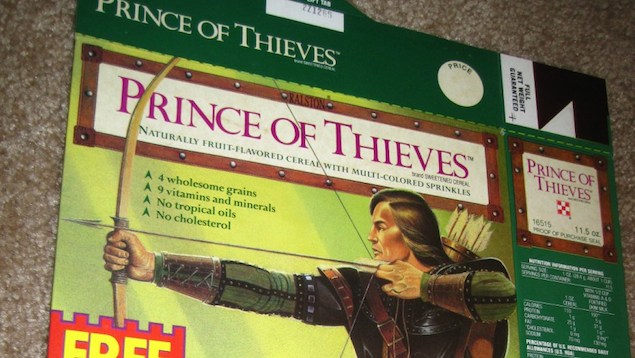 The cereal tie-in used to be a staple of movie marketing, because it’s never been that hard to form sweetened grain-puffs into a shape that vaguely resembles something related to a kid-friendly motion picture. That’s how a chocolate version of Chex with bat-shaped marshmallows became Batman Returns cereal, or how a bowl of crunchy robot-parts was sold as C-3PO’s, or how assorted peanut-buttery “E”s and “T”s were passed off as E.T. Cereal. (See also: Gremlins cereal, Bill & Ted’s Excellent Cereal, and Jurassic Park Crunch, among a slew of others.) Ralston’s Prince Of Thieves Cereal is a weird one for multiple reasons. For one thing, the words “Robin Hood” are missing from the name, and there are no actual pictures from Kevin Costner’s movie on the box anywhere—not even on the front, which sports a drawing of the titular “prince of thieves.” But the most alarming element of this cereal is the cereal itself, which consists of speckled arrow-shapes that… well, there’s no delicate way to put this, they look like little penises. So if anyone ever tells you to “eat a bowl of dicks,” get the last laugh by pulling out a box of Prince Of Thieves Cereal and going to town. 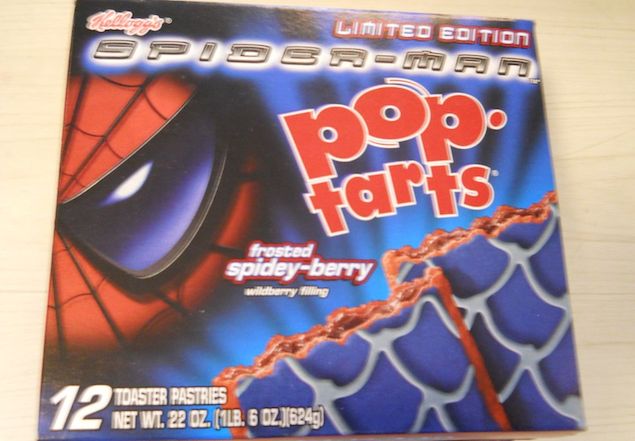 Each new Spider-Man movie brings with it a legion of licensed Spider-Man products, many of them edible, some of them awfully dubious. (Superhero candy cigarettes? Really?) To wit: Spider-Man Pop-Tarts, launched in conjunction with the Sam Raimi film series in the early 2000s. They looked crazy—red crust with blue and gray “Spidey-Berry” frosting—but they were actually delicious, at least by Pop-Tart standards. Kellogg’s brought back the snack for The Amazing Spider-Man, but instead of Frosted Spidey-Berry they were now “Yum-mazing Vanilla” flavored, and the taste and presentation—regular old Pop-Tart crust with red frosting and blue spiders—were as bland as the name. Give Kellogg’s props, though, for making a toaster pastry that was faithful to the movie it’s tied to: Both were disappointing, unnecessary reboots. 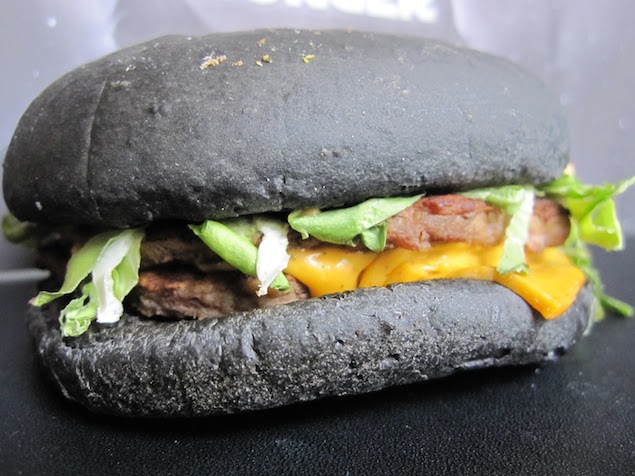 Star Wars has had enough crazy movie tie-in foods to fill its own list—particularly if you’re a fan of French kissing Jar Jar Binks—but none crazier than this specialty hamburger released as a cross-promotion with the 3-D version of The Phantom Menace in 2012. The French fast-food chain Quick actually sold two different Star Wars burgers; the “Jedi Burger” had cheese and horseradish sauce, but the “Darth Vador” burger, which came with two patties, American cheese, lettuce, tomatoes, and spicy sauce was the real star, thanks to a bun blacker than Darth Vader Vador himself. Admittedly, no one on-staff has actually eaten this unique item; it was never made available in the United States. But c’mon. Who doesn’t want to eat a burger served on something that looks like it died six and a half years ago? 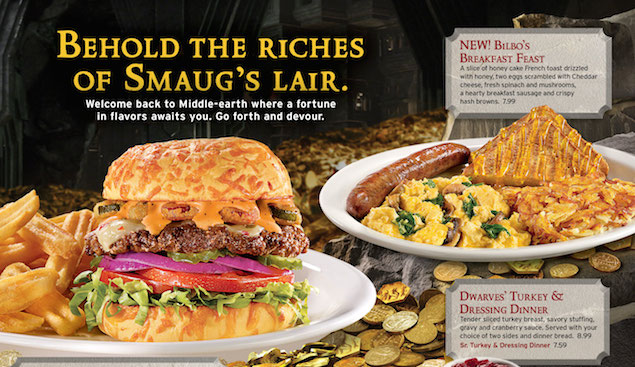 Like the cereal tie-in, the fast-food tie-in used to be a lot more common than it is today, with restaurants slathering a new kind of sauce on one of their existing sandwiches and claiming the new product was inspired by some cartoon or superhero movie. Lately, Denny’s has been both keeping that tradition alive and raising the bar with its Hobbit-themed menus. The restaurant has introduced a plethora of legitimately new items—seed cake french toast, sweet potato pecan pancakes, red velvet pancake puppies, huge “Shire” sausages, all kinds of pumpkin-y crap—and combining them onto “slam” platters named after various Hobbit characters and locations. Because if there’s one thing that hobbits are known for, it’s hypertension.