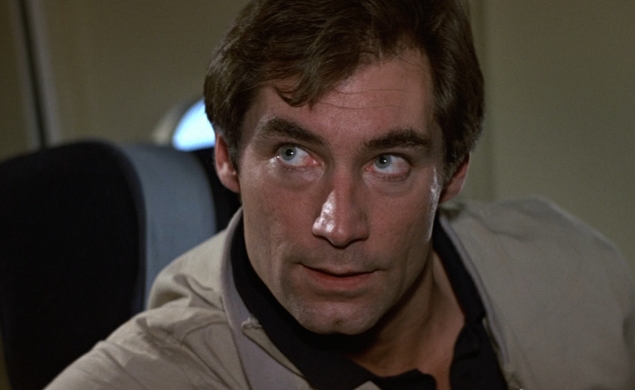 It’s been a few weeks since “Feedback” has pointed to the ongoing, commenter-generated “Lovefest” essays (posting every weekday in the comment section of “Read On”), but for those who haven’t been reading them, or have fallen behind, every weekday commenter Julius Kassendorf posts a list of all the essays to date, so it’s never too late to dig in. The most recent Lovefest, by Batzmania, covers the 1989 James Bond movie Licence To Kill, and is a highly entertaining appreciation of Timothy Dalton’s second sojourn as 007. One section of Batzmania’s review particularly caught my attention, since it touches on a subject that’s been something of a preoccupation of mine for years:

“Licence to Kill is the opposite of The Living Daylights on the Greenwich Timothy Dalton Scale of Bondian Proportions: the latter is the mature, responsible movie that says helping Afghanis defeat the Soviets can have no terrible ramifications in the future, and the former has the free-wheelin’ Bond Villain needing to be put down with a healthy syringe of revenge… Now I’ll finally talk about the PG-13 movie, the first Bond film to stop being polite and start being too violent for 12-year-olds (their minds are too small to understand blood). And bloody is as bloody does, because killing isn’t a clean business and neither is drug-dealing. Franz ‘Double Z Trouble’ Sanchez is a man who prizes loyalty above all else, including money and common sense… We first meet him when he finds his abused girlfriend Lupe Lamora in bed with another man, and like any good piece of scum that is gonna get got, Sanchez beats her with one of those really heavy whips, you know the kind, while trusty right-hand man Dario cuts out the anonymous guy’s heart off-screen. Did I mention that Dario is portrayed in a star-making turn by a young and sleepy-looking Benicio del Toro? And that his henchman specialty is having an open switchblade slide out from his sleeve as if his arm was like a switchblade-arm?… I can appreciate why LTK is a hard PG-13, cocaine in oil tankers included.”

That’s one way to look at it, Batz. Another way is to recall that there was once a glorious time when PG-rated movies were wide-open enough to contain the kind of language that mothers didn’t want their kids to repeat, and even a little of what the cable guides promisingly called “brief nudity.” (And believe me, at my school, we all, boys and girls alike, knew exactly which PG movies really had the goods.) And yet for all that, PG movies remained relatively safe and tame, which meant that one of the major rites of passage for young folks was going to an R-rated movie with parents, or sneaking in with friends, or staying up late to watch one on cable after everyone in the house was asleep.

We didn’t have cable in our house when I was growing up, so I’d plan sleepovers at my cable-having friends’ houses to coincide with R-rated movies I wanted to see—usually without telling my friends that was my plan. (After we’d played a few hours of Atari, I’d casually ask, “I wonder what’s on HBO right now?”) I even remember staying with my grandparents, who only had the basic cable package, and sneaking down to their TV after midnight to take advantage of a cable-box glitch that allowed scrambled channels to show up clearly for one second before re-warping. I watched every other second of The Last American Virgin that way.

I hate PG-13, and not just because I’m nostalgic. I hate it because the introduction of that rating changed the definition of what qualified as “adult.” Introduced in response to parental complaints about the gore in Gremlins and Indiana Jones And The Temple Of Doom, PG-13 quickly became an excuse to load up general-audience movies with more violence. Meanwhile, anything having to do with sex has been subtly reclassified, such that if a movie treats sex with sophistication, it’s rated R (regardless of the level of nudity), and if it’s loaded up with dirty jokes, it’s PG-13 (so long as it avoids the word “fuck”). The world of the PG-13 is not my favorite world. It feels artificially grim, bloody, and smutty; and yet unlike the R-rated movies of my youth, it doesn’t really feel like a step toward adulthood. The “13” seems to signify “made for 13-year-olds.”

I’m not anti-MPAA. I don’t agree with every ratings decision the board makes, and from what I’ve read about the process of submitting movies to be rated, the MPAA could stand to have a lot more transparency; but I do believe that MPAA is doing its best to reflect “community standards.” That said, the introduction of the PG-13 rating was an inelegant solution to a non-problem, creating this nebulous space for genre movies to be darker, but not truer. Batzmania, you’re right that a PG-13 James Bond movie more accurately reflects the violence of international espionage, but if the Bond movies were really accurate, they’d be rated R. I liked the PG Bond, with their nude silhouettes in the opening credits and their bloodless gunplay; and I’d probably enjoy an R-rated Bond, with more explicit sex and violence. But even though PG-13 has become the norm for big blockbusters, I’ve never stopped feeling like those movies represent Hollywood trying to get away with something, and obliterating the meaning of “maturity” along the way.