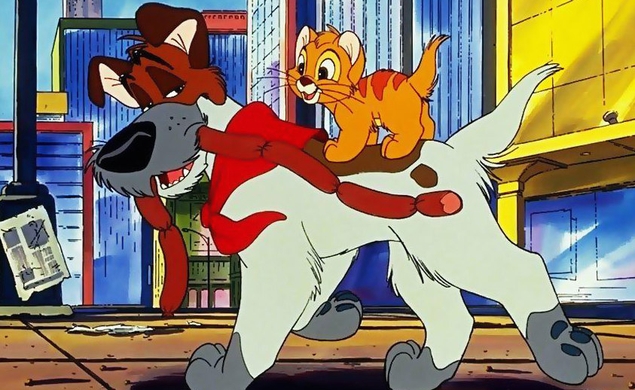 “Oliver & Company had an unfortunate cross to bear.  It needed to get people into the theater to see a Disney film after years of weak animated offerings and live action duds while in the same breath get them excited to see what Disney would deliver next.  The fact is, the film not only succeeded at both these challenges, it broke the backboard, shattering glass all over the court.  Audiences were so smitten with what Disney had presented to them with Oliver & Company that their very next animated feature, The Little Mermaid, ushered in what is now referred to as ‘The Disney Renaissance’–a 10 year period where Disney dominated the animated world until newer studios DreamWorks and Pixar came into the fold.”

“Gaudio becomes the fourth member and cowrites the group’s hits, a lot them with producer Bob Crewe (Mike Doyle), who’s presented here as a canny, swishy Jersey queen with Park Avenue tastes. There’s an outlandish scene in which everyone sits around Crewe’s enormous apartment watching Billy Wilder’s Ace In The Hole. When Kirk Douglas slaps Jan Sterling, Tommy says, ‘I betcha she cries.’ Crewe, mesmerized by the television, replies, ‘No, no. Big girls don’t cry.’ And Gaudio turns to Crewe, with creative disbelief in his eyes. I suppose these movies need a ‘How’d they come up with that hit?’ scene. I generally don’t like them. But this one I liked.”

The A.V. Club’s Mike D’Angelo on one scene from Fritz Lang’s The Big Heat:

“Audiences of the 1950s weren’t stupid. They knew perfectly well what happens when someone gets shot, even if few people back then had seen the graphic representations we’re all accustomed to today. Bloodless gunshot wounds were a convention of the era, accepted by viewers in the same way that a theater audience still accepts them now (though, for all I know, onstage squibs are now commonplace). Violence could be largely implied. That’s doubly true of The Big Heat’s most famous scene, in which gangster Vince Stone (Lee Marvin), angry at his girlfriend, Debby (Gloria Grahame) for flirting with another cop and lying to him about it, impulsively throws boiling-hot coffee onto her face, scalding her horribly. Not having seen the film for almost 20 years, I remembered nothing about it apart from this moment, and had constructed a false memory of Stone flinging the contents of the coffeepot at Debby as she tries to shield herself. In truth, the brutal act happens entirely offscreen.”

At /bent, the creators of a documentary on Greg Louganis on why they made their film:

“There’s a common perception that Olympic Gold Medalists are set for life right? Well, not if you were known to be gay in the 1980s and came out publicly at HIV+ in the 1990s. Well, we certainly didn't expect to find Greg on the brink of bankruptcy when we began shooting. How did he end up there and how did he end up so far away from ‘his sport?’ We knew that Greg’s return to diving gave us a natural way to tell his unique story and explore his enduring legacy.”

Plus, the rest of today’s biz-ness:
-The trailer for Frank with Michael Fassbender
-The trailer for the Norwegian adventure film Ragnarok
-Dear God, another Entourage movie?
-Capturing The Friedmans subject sues district attorney
-Someone explain this Arnold Schwarzenegger coding language to me, because I want to laugh at it but I’m too dumb