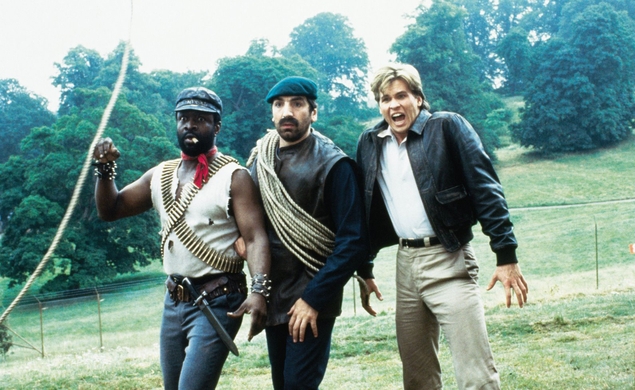 ScreenCrush’s Mike Ryan with the oral history of Top Secret!:

“Val [Kilmer] was aware that Nick Rivers was kind of vacuous. And that was always a struggle for Val. He couldn’t figure out what would this character do—Val is an actual actor and we were just pretty much interested in people telling our jokes. But he was a true actor and was looking for something in that character to play. He did salvage Nick Rivers, but that was always his struggle when filming.”

“Early in the film we learn that Maggie is pregnant, a fact that she keeps secret from her husband until she discovers that the fish they been eating from the river have been poisoned by the same substances that have produced Katahdin and its brood. She knows her own child will suffer the same fate, and consequently regards the mutant cub they find with a displaced motherly affection. As she swims through the river, carrying it in one of her arms, the cub grows terrified as it hears its biological mother howling in the narrowing distance of pursuit, and begins biting and tearing at Maggie’s throat. She drowns the cub, as she will presumably abort the mutant fetus growing inside her.”

“If you think summer movies are clamorous, try a current Broadway musical. Watching Jersey Boys onstage is like soldiering through some extreme eating contest where you’re force-fed dessert for three hours. It’s all falsetto heroics and hustled-through character drama, every beat of every scene over-scored, over-rehearsed, and overbearing. And it’s often glorious, even as the sugar-rush of "Sherry" chills and hardens into a brain freeze.”

At To Be (Cont’d), a continuing conversation about movies as puzzles:

“I suppose I am smack dab in the middle of the generation that fostered this brand of cinematic storytelling: I was 16 when The Usual Suspects was released, and 20 when the holy quartet of this mode of filmmaking–Fight Club, The Sixth Sense, Being John Malkovich, and The Matrix–all came out. I was not that impressed by any of them at the time, except The Usual Suspects, and I’m even less so now, and I don’t know why I’ve not shared that generational enthusiasm… Many of the films mentioned above have radical twists or delve into unstable narrative planes essentially as a gimmick, a way of entertaining the audience by deceiving it, like a three-card-monte trick.”