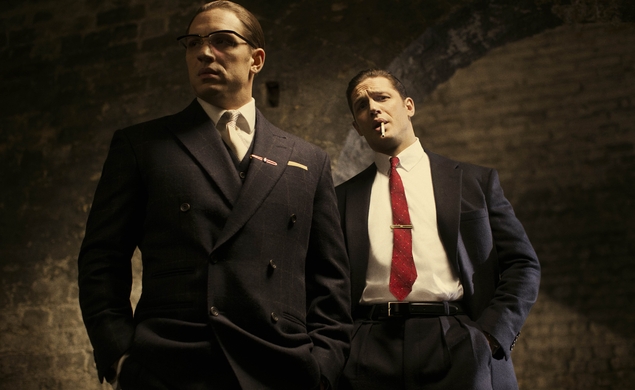 The lives and crimes of twin gangsters Ronnie and Reggie Kray have already inspired one movie—Peter Medak’s overly sedate 1990 biopic The Krays—along with countless books, and multiple passing references in British popular songs, comics, films, and TV shows. And now Oscar-winning writer-director Brian Helgeland (best-known for 42, and for writing Mystic River and L.A. Confidential) is adapting John Pearson’s book The Profession Of Violence: The Rise And Fall Of The Kray Twins into the movie Legend, starring Tom Hardy as the two famed London nightclub owners who allegedly controlled the area’s organized crime in the 1950s and 1960s, all while maintaining a high public profile.

Legend started shooting last week, with Hardy joined by Emily Browning, David Thewlis, Christopher Eccleston, and Chazz Palminteri. The movie is scheduled to come out in the United States in late 2015, distributed by Universal; today, the production company Working Title released the first photo, posted above, showing Hardy in full Krays regalia. Hardy looks good in his retro suits, and Helgeland has done some of his best work telling crime stories, so this film could be a good one, in the mix for awards next year. And yet… Legend? That’s the best title they could come up with? Sure, The Krays is already taken, but what’s wrong with The Profession Of Violence? Or something snappier? (Double Trouble? Twin Killing? I’m just spitballing here…)