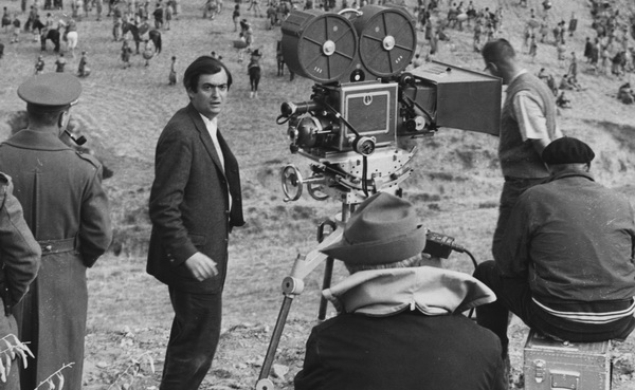 For the past couple of weeks, movie buffs have been abuzz about writer-director Edgar Wright’s decision to resign from Ant-Man, a film he’d been developing with co-writer Joe Cornish for Marvel Studios since 2006. At the moment, all we have are rumors about why Wright left (reportedly because Marvel was demanding major script changes mere months before production was set to begin) and outrage from some fans over Marvel’s decision to hire Adam McKay to re-write the script and Peyton Reed to direct. But does a change in director really mean that Ant-Man is doomed? Directors have long come and gone from major motion pictures—sometimes just before shooting began and sometimes well into principal photography—and not all of those films have been disasters. Here are five multi-director movies that run the gamut from misbegotten misfires to Hollywood classics.

Spartacus has always seemed like an odd outlier in Stanley Kubrick’s filmography—a fairly straightforward historical epic, well-made but impersonal—and there’s a good reason for that. Kubrick was a last-minute replacement on Spartacus, brought in to relieve Anthony Mann, who was fired after a week by producer-star Kirk Douglas, reportedly because Mann struck Douglas as too hesitant and anxious. Kubrick owed Douglas a favor, since the star was largely responsible for getting Kubrick’s 1957 WWI drama Paths Of Glory made; and Kubrick benefited from the success of Spartacus, which was nominated for six Academy Awards and was his first substantial box office hit. But the real man in charge of Spartacus was always Douglas, who made use of Kubrick’s steely confidence to wrangle thousands of extras and tell a rousing story of a Roman slave uprising.

When Clint Eastwood demanded that The Outlaw Josey Wales’ producer Robert Daley fire writer-director Philip Kaufman early in the shoot, the act so scandalized Hollywood that the Directors Guild Of America levied a fine on the production, and drafted new rules penalizing producers for replacing directors under questionable circumstances. In the case of The Outlaw Josey Wales, Eastwood reportedly bristled at Kaufman’s deliberate pace, and took charge of the film himself because he knew he could do it faster. Some still see Josey as Kaufman’s picture, because Kaufman co-wrote the screenplay and did all the prep-work, which Eastwood just had to follow. But it was Eastwood who had helped initiate the project in the first place, and the end product has the look, tone, and quirks of other Eastwood Westerns. No matter who’s ultimately responsible, it’s one of Eastwood’s best films.

Rumor Has It… (2005)
Directed by Rob Reiner (replacing Ted Griffin)

Screenwriter Ted Griffin began his movie career with the troubled production Ravenous, which started as a film by Milcho Manchevski, before Manchevski was fired and ultimately replaced by Antonia Bird. Griffin got to experience director/producer conflict from another perspective when he attempted to make his directorial debut with Rumor Has It…, filming his own script about a young woman who discovers that her family’s romantic history may have inspired The Graduate. But Griffin allegedly had trouble with his crew, and fell behind schedule, before getting fired after three weeks of filming by one of the film’s executive producers, Steven Soderbergh. (Soderbergh himself would get to go through what Griffin went through not long after that, when he was canned from Moneyball days before shooting was supposed to begin.) Rumor Has It… was taken over by Rob Reiner, who re-cast some of the picture and reportedly re-wrote much of it as well. Griffin still hasn’t directed a feature yet, so it’s impossible to say whether his vision would’ve been worth the trouble; but while the Reiner Rumor was panned by the critics, it did reasonably well at the box office.

If Marvel’s producer-first philosophy resembles anything in movie history, it’s Hollywood’s so-called “Golden Age,” when most of the power in the movie industry still remained with the studios and then executives who ran them. Though film is now almost universal regarded as a director’s medium, the golden age produced many by-committee masterpieces. Case in point: 1939’s The Wizard Of Oz, which began under the direction of Norman Taurog, who was quickly replaced by Richard Thorpe—who was taken off the film after two weeks of shooting. George Cukor temporarily assumed control of the picture, until Victor Fleming arrived to take charge. Fleming was credited with directing the film—but he too was replaced, when MGM needed him to direct Gone With The Wind; as a result, King Vidor shot Oz’s sepia-toned bookends, including Judy Garland’s famous rendition of “Over The Rainbow.” Despite all the turmoil behind the scenes, the “genius of the system” and the steady presence of producer Mervyn LeRoy kept The Wizard Of Oz on track, and the film became a beloved classic for generations.

On the other hand, not all directorial replacements go quite so smoothly, or result in a product quite so memorable or confident. Frequent upheaval behind the scenes of a long-planned prequel to William Friedkin’s 1973 film The Exorcist actually resulted in two entirely different movies: Paul Schrader’s Dominion: Prequel To The Exorcist and Renny Harlin’s Exorcist: The Beginning. In fact, both directors were substitutes for a previous filmmaker: John Frankenheimer, who was set to direct the film, about the first meeting between Father Merrin (played in both prequels by Stellan Skarsgard) and the demon Pazuzu, but left the project because of health problems shortly before his death. Frankenheimer begat Schrader, whose Dominion was deemed too uncommercial by the film’s backers, so Schrader then begat Harlin, who abandoned most of Schrader’s footage and reshot a new screenplay. Both films wound up making their way into the public eye; a year after Harlin’s film opened in theaters, Schrader’s received a limited release. The results are a strange and unique diptych—two drastically different versions of the same concept by two directors—but neither film is particularly satisfying on its own, and both were quickly forgotten.