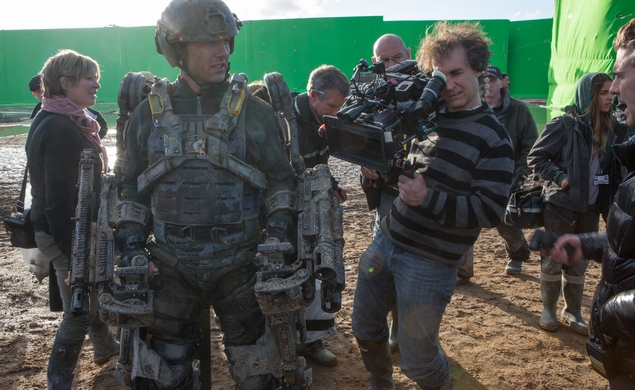 “As producers and studio bosses gnashed their teeth, the situation resulted in a testy exchange among Liman, Cruise and Emily Blunt (The Five-Year Engagement, The Devil Wears Prada), who costars as legendary commando Rita Vrataski—a character known as ‘full-metal bitch’ for having killed 1,000 mimics in a single battle—who mentors Cruise’s reluctant hero. ‘I was a little under pressure and I snapped,’ Liman recalls. ‘And Emily said, ‘Easy, I’ve never made a movie like this before!’ I fired back, ‘Well, neither have I!’’”

At To Be (Cont’d), the conclusion of a four-part conversation about David Lynch’s Twin Peaks: Fire Walk With Me:

“Fire Walk With Me is a pivot point in Lynch’s oeuvre and certainly of a piece with Lynch’s subsequent movies. (Only The Straight Story is an anomaly; it bears many of his hallmarks but feels more like a director-for-hire project.) In explaining why he chose to shift the focus away from Kyle MacLachlan’s Agent Cooper to Laura Palmer Lynch justified his attraction to the character. ‘I wanted to see her live, move and talk,’ he says in a quote from your first piece, describing her as as ‘radiant on the surface, dying inside.’ It’s immediately apparent from the performance he coaxed from Sheryl Lee how much he empathizes with Laura.”

“Not so long ago actresses who found themselves ‘with child’ risked losing their jobs. In 1941, director Preston Sturges confronted Veronica Lake—better known for her figure than her acting chops—about rumors of a pregnancy before shooting his classic Sullivan’s Travels. Despite her stardom, Lake feared she would be fired if she told the truth, so she didn’t. When she showed up on set six months pregnant, Sturges was outraged, but it was too late to make a casting change. Legendary costume designer Edith Head hid the pregnancy beautifully, and a body double was brought in for some scenes. But costar Joel McCrea was so angry about Lake’s deception that he refused to work with her again (plus he said she couldn’t remember her lines). It gets worse. In 1942, Judy Garland—20 and pregnant—was encouraged by MGM executives to have an abortion rather than sacrifice her girlish image. The studio’s publicity chief accompanied her to the procedure.”

“Some people won’t like this movie because it’s too much like the original, too faithful. The Western genre almost transfers to samurai too well, there’s not a huge amount of it that has to be changed. At the same time, there are some aspects that we all love from Unforgiven that are left out or toned down in this version, mainly having to do with Gene Hackman’s character Little Bill Daggett. The equivalent character Ichizo really makes an impression in a couple of scenes but I’m pretty sure he doesn’t have as much screen time. He doesn’t have the house he’s building or some of the scenes that really explore what his life is like outside of this feud. Since he doesn’t have as strong of a presence in the movie it doesn’t have as much of a feeling of being a story about two strong characters butting heads.”

“Plus, the rest of today’s biz-ness:
-Ben Foster reveals Warcraft role
-The 100 best documentaries streaming on Netflix
-Editor/actor Frank Mazzola missing since Friday
-A whole mess of pictures from the set of Star Wars: Episode VII
-Some of the new Star Wars sets are inspired by old designs