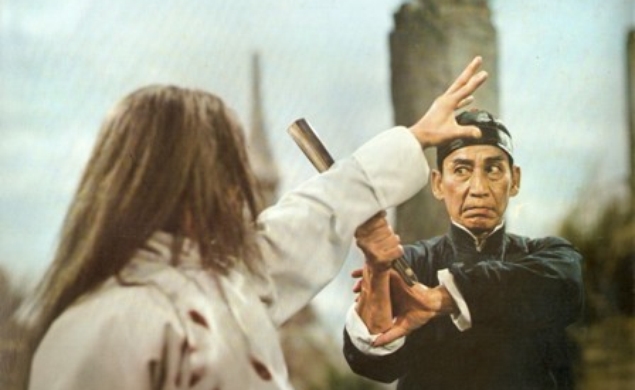 As part of what’s become Shout! Factory’s mission to preserve and promote the kinds of movies that used to be cool video-store finds in the 1980s and 1990s, the company has lately been releasing solid, reasonably priced DVD sets of Hong Kong martial-arts pictures, including series devoted to the films of Bruce Lee and Jackie Chan. Unlike Shout! Factory’s actor-themed sets, though, the new four-movie, two-disc “Martial Arts Movie Marathon” brings together four relatively unrelated films, with different stars, different directors, and varying approaches to the genre, connected only inasmuch as they were all originally released by Golden Harvest in 1974 and 1975. And yet aside from the fan-friendly inclusion of both English and Mandarin audio tracks, this set is in some ways truer to the video-store experience than the more curated Shout! Factory DVDs. It’s a throwback to the days when fly-by-night companies would dump three movies onto a six-hour tape, and Hong Kong action devotees had to figure out for themselves which ones were the buried gems.

A few names jump right out from the back of the “Martial Arts Movie Marathon” box. The biggest of these is John Woo, who wrote and directed 1975’s The Dragon Tamers, starring Carter Wong as a Chinese taekwondo student getting in trouble in Korea. Woo moves the camera frequently, but with less sense of purpose than in his 1980s/1990s masterpieces; and the plot’s both thin and confusing, coming to life only when a band of jumpsuited female students enter the picture. The Dragon Tamers is of historical interest only.

The Skyhawk is another historical curiosity, featuring an early performance by Sammo Hung (as “Fatty”) and one of the last performances by the legendary Kwan Tak-hing in the role he played over 70 times on screen, Wong Fei-hung. Kwan doesn’t show much of the physical prowess that made him a star, but he still has a charismatic screen presence, and he’s so beatifically cool and philosophical as the old master.

Hung returns in The Manchu Boxer, as one of the opponents faced by an itinerant fighter played by Tony Liu. Liu had played small roles in several Bruce Lee films in the early 1970s, and while The Manchu Boxer has a plot that could’ve come from one of those Lees—with the hero entering a tournament to show up a cruel boss—Liu lacks Lee’s wiry confidence. The movie’s still highly entertaining, thanks to the simple plot and a funky soundtrack (which at one point directly rips off the intro to Pink Floyd’s “Time”), but it’s not as entertaining as The Association, a batty police thriller, about a secret prostitution/abortion ring and the robed detectives determined to take it down no matter how many naked occult ceremonies they have to raid. Stylish, strange, and trashy—with an ass-kicking cameo from Angela Mao—The Association is too choppy to be called “good.” But it’s the kind of movie that would’ve been lost on one of those old multi-film VHS tapes, to be found by fans who’d be giddy about what they’d stumbled across.