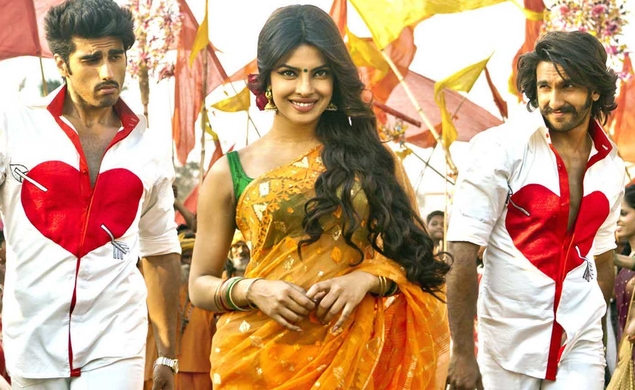 What is the worst movie ever made? According to IMDb, the Internet’s most popular and trusted movie database, it’s Gunday, a recent and relatively obscure Bollywood movie starring Ranveer Singh, Arjun Kapoor, and Irrfan Khan. But on Rotten Tomatoes, Gunday actually has a perfect 100% approval rating from five critics, including Rachel Saltz of The New York Times, who calls it “preposterous… but rarely dull.” Nonetheless, Gunday currently ranks dead last among the IMDb’s 235,000 titles with a 1.4 rating. The next-closest stinker, the Paris Hilton vehicle The Hottie & The Nottie, holds a relatively robust 1.8. The despicable Ed, starring Friends’ Matt Le Blanc as a crummy minor leaguer whose career is inexplicably revitalized with the help of a baseball-playing monkey, somehow earned a fairly healthy 2.5.

Thirty years ago, another worst movie poll came to a very different conclusion. 1980’s The Golden Turkey Awards, by Harry and Michael Medved, asked readers of their first book, The Fifty Worst Films Of All Time, to write them with their nominees for the worst films ever made. They received 3,000 ballots, a pretty impressive number in the pre-Internet age for a poll about terrible movies that meant absolutely nothing to anyone. Their number one vote getter was Plan 9 From Outer Space, Edward D. Wood Jr.’s legendary stinker about grave-robbers and Bela Lugosi body doubles from beyond the stars.

Many cinephiles would call Plan 9 so bad it’s good, and disqualify it from contention for this sort of list on those grounds. Still, it’s hard to argue that the film has endured as a legendary exemplar of trash cinema, and all these years later, it’s often mentioned as the “winner” of the Golden Turkey Awards. Less has been written or said about the Golden Turkeys’ runner-up: Exorcist II: The Heretic, which “lost” to Plan 9 by just nine votes, 393 to 384. No one would argue today that Exorcist II is a widely-beloved classic. But the worst film ever made? That seems like a stretch.

So how did it get so many votes? Simple: it was fresh in people’s minds. The Medveds were polling readers at the end of the 1970s, about two years after Exorcist II opened to some terrible reviews and tons of bad publicity while its director, John Boorman, repeatedly tried and failed to recut it into something resembling a popular hit. It wasn’t the worst movie ever made; it was the first worst movie that voters thought of when filling out a Golden Turkey ballot. In fact, all but two of the runner-ups for the worst of the worst in the Golden Turkey Awards were made in the 1970s, including Airport 1975, The Swarm, and Sgt. Pepper’s Lonely Hearts Club Band. Other than Plan 9, no bad movie released before 1966 received enough support to crack the bottom 15.

Gunday was released in 2014, so perhaps something similar happened there? Not exactly. FiveThirtyEight investigated the un-fun-day for Gunday and discovered it was the target of an online protest of a group called Gonojagoron Moncho, who took issue with the film’s depiction of the 1971 war with Pakistan that liberated Bangladesh. Online activists started a hashtag (#GundayHumiliatedHistoryOfBangladesh) and urged people to bury the film on IMDb. 44,000 votes later, Gunday was at the bottom of a very ignominious list.

The protesters may have had a legitimate beef with Gunday, but it’s easy to imagine similar methods being put to similar use for much less serious reasons. Any media celebrity with a big enough social media presence and enough time on his hands could hugely affect this list. Let’s say, for example, that Justin Bieber saw Last Year At Marienbad and decided he wasn’t keen on its dreamy ambiguity. Enraged and confused, Justin could theoretically tweet (to his 51 million followers) something to the effect of “Eff this garbage! I hate Marienbad! Kiss my grits Alain Resnais! Down vote this thing on IMDb!” with a link to the film’s page.

44,000 votes were enough to make Gunday the new worst movie of all time. If even 1% of Justin Bieber’s followers obeyed his adorable, Canadian demands, that would give Last Year At Marienbad 500,000 negative votes. Faster than you could say oooo baby, it would be the new worst movie according to the IMDb.

Which is a somewhat unlikely and extremely long-winded way of reminding you that in spite of society’s love of polls and lists and definitive titles, there is very little definitive about any poll or list or title. Today’s masterpiece is tomorrow’s obscurity. Yesterday’s disaster is today’s forgotten gem. And just because a whole bunch of people vote about something doesn’t mean they love it or hate it or even watched it before they clicked their mouse.

The Golden Turkey Awards are just as old as I am, and Sight & Sound has been polling film critics for more than half a century. But there does seem to be an increasing obsession on the Internet with boiling movies down to lists and graphs and data. It’s a natural impulse; clever infographics are fun and interesting, and eminently shareable on social media, where they can generate huge amounts of traffic for websites, which is no small thing in a very competitive marketplace. Last week, for example, the website Vocativ rated “America’s movie critics,” including The Dissolve’s Keith Phipps, Scott Tobias, and Nathan Rabin, in a handy .jpeg that could be emailed and reposted hither and thither and yon.

But that graphic, as handsomely designed as it is and as authoritative as it looks, has some problems. For one thing, it’s checking critics’ ratings against Metacritic scores, a website that cherry-picks reviews from a select number of critics and then assigns them a number based on their own sometimes incorrect interpretation of their opinion. If you cross-reference the Vocativ chart with Rotten Tomatoes you find seemingly contradictory results; “safe bet” critic J.R. Jones, for example, actually agrees with the Rotten Tomatoes consensus less than “hater” Joe Morgenstern.

Even under optimal circumstances, movies aren’t math. And on the Internet, optimal circumstances don’t happen that often. IMDb’s head of PR told FiveThirtyEight that while the site monitors potential examples of “ballot stuffing, the policy is not to delete or modify individual ratings from registered users.” So Gunday’s worst movie ever status stands for now, at least until Justin Bieber mobilizes his followers against the French New Wave. So remember to consider the methodology of what you’re reading online. Rankings and list are fun, but it’s always wise not to put too much stock in anyone’s opinion but your own. Just because IMDb says something is the worst movie ever made, that doesn’t make it so.