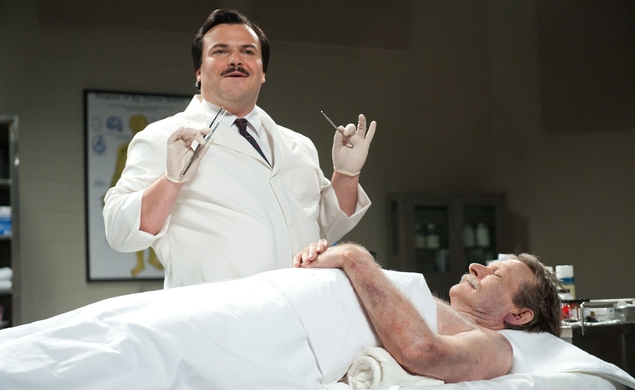 Richard Linklater’s 2011 film Bernie told the true story of mortician and murderer Bernie Tiede (played by Jack Black), who, in 1996, killed his employer Marge Nugent (Shirley MacLaine) and then hid her body in a freezer for months. Linklater’s film mixed a fictionalized account of the events with talking-head interviews (some staged, some genuine) with the residents of Tiede’s hometown of Carthage, Texas, many of whom were sympathetic to the convict’s plight, and expressed as much or more sympathy for him (a respected member of the community and avid churchgoer) than his victim (who was wealthy but cruel).

Tiede was convicted of Nugent’s murder and sentenced to life in prison in 1999, where’s he’s stayed for more than 15 years. But in a new and Richard Linklater-movie-worthy twist to the story, the Bernie of Bernie may be released from jail as early as next week, on the condition that he lives with Richard Linklater.

The Texas Tribune has an extensive report on the latest details of this unique case. The new wrinkle centers around a revelation about Tiede and his past: As a young man, he was “repeatedly sexually abused from ages 12 to 18.” Had this information come to light during his first trial…

“[The jury] would have handed down a lighter sentence. On Tuesday, state district Judge Diane DeVasto is set to hear testimony from psychiatrists who have evaluated Tiede, and from Linklater, who has agreed to allow the former funeral director to live with him in Austin, among others.”

The psychiatrists who’ve examined Tiede now believe his actions could have been the result of a “dissociative episode” brought about by his past trauma, which would qualify the murder as a crime of “sudden passion.” Such murders come with less harsh penalties than those that are deemed to be premeditated. That’s why, according to the Texas Tribune report, Tiede is expected to be granted a release on bond on Tuesday, “under the condition that he live in Austin with Linklater and that he seek psychological help to cope with the abuse.” And in yet another twist, the Tribune claims the town of Carthage has turned its back on the man they once supported just in time for his release. This whole scenario practically begs for a Bernie sequel, perhaps this time as a documentary.