Short Cuts: “Foureyes,” a cartoony comedy about a near-sighted pre-pubescent 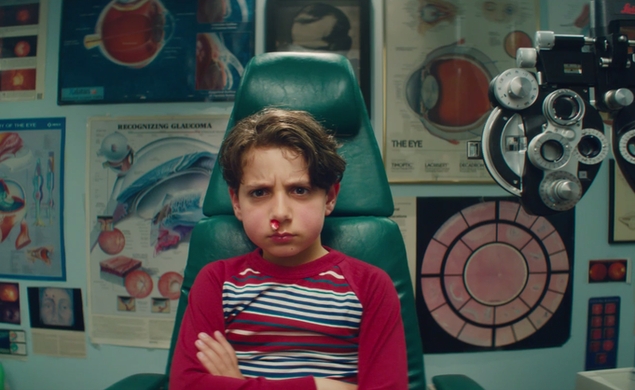 About halfway through Conor Byrne’s short “Foureyes,” nearsighted young Bobby Bowersox (played by Jake Ryan) sits through a classroom sex education lecture that Byrne presents as a rapid-fire montage of medical drawings, plastic models, and snippets of instructional animated cartoons. Those cartoons are key to the tone that Byrne is trying to set with “Foureyes.” On a fundamental level, this is a film about a boy going through a tough time, dealing with a surge of hormones and the pressure to grow up at the exact moment that his vision is starting to falter. But Byrne doesn’t play this material as a sensitive coming-of-age story. He channels Frank Tashlin, Wes Anderson, and John Hughes, and makes the kind of movie where a well-meaning father tries to explain sex to his son by brandishing a sausage link and a donut.

The comedy in “Foureyes” may be too over-the-top to be to everyone’s taste. (Honestly, it’s not always to mine.) But the film is a consistent visual delight, utilizing a widescreen frame, detailed set-decoration, and insert shots that pop in and out so quickly that they’re almost subliminal. Byrne has a strong sense of the kind of pictures that stick in a young man’s head and stay there for the rest of his life: a glimpse of his sister’s underpants streaked with blood; an aerobics video with curvy women in tight spandex; and so on. The broadness of “Foureyes” serves a purpose, because that’s how the world looks to Bobby: as one big blur, with occasional objects and people showing up so clearly that they preoccupy and overwhelm him.

And yet for all the (semi-NSFW) images of blooming sexuality at its most alluring and its most disgusting, one of the details that stands out the most in “Foureyes” is of Bobby’s Bamm-Bamm drinking glass, which he still uses when he has meals with his family. That’s the other kind of cartoon that dominates Bobby’s thoughts: all those Saturday morning and syndicated afternoon shows that kids his age are still interested in watching, even when they’re also sneaking into Dad’s office to steal glimpses of his porn collection. Byrne and his brother Tyler were both involved with the recent revenge thriller Blue Ruin (Tyler as a producer and Conor as the title designer), but “Foureyes” is a different kind of character sketch, about a boy who tries to resist adulthood until the forces inside his body push him headlong into puberty.