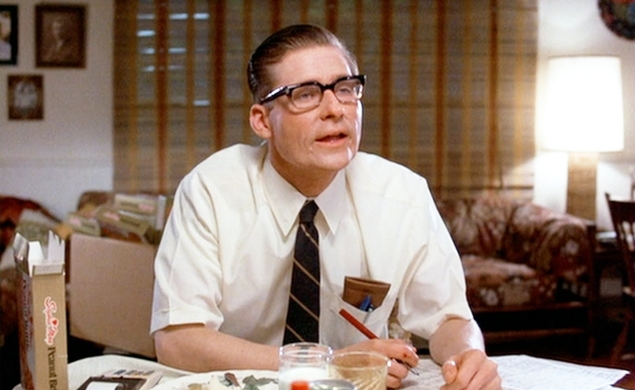 This video started making the rounds of film and geek websites yesterday. It’s a nine-minute YouTube clip of actor Crispin Glover appearing on The Opie & Anthony Show, explaining why he didn’t appear in either of the two Back To The Future sequels:

In short: Glover wants to refute the “total fabrication” by BTTF producer/co-writer Bob Gale that Glover didn’t appear in the sequel because he demanded to be paid “the same amount of money” as Michael J. Fox. He says that claim was made to distract from the lawsuit Glover filed against Universal (and then settled out of court for an undisclosed sum) for using his likeness in Part II without his permission. As he says in the video, after he passed on the film, Gale and director Robert Zemeckis hired actor Jeffrey Weissman to play Glover’s character, George McFly, under a bunch of prosthetic makeup.

It’s a juicy story—but it isn’t not strictly news. Glover has been beating this drum since at least 2010. In 2012, in an interview with our own Tasha Robinson, Glover gave almost the exact same account of the events: the fight with Zemeckis on the set of Back To The Future, the concern over how the McFlys equate wealth with happiness, and the accusations from Gale that he made outrageous contractual demands for Part II.

Curious about the specifics, I tried to track down the Gale comments that started all of this. In 2010, Glover said he was defending himself in response to Gale’s statements on the Back To The Future Blu-ray, that he asked for “twice the amount of money” Fox got for the first film. On the “Q&A Commentary” for Part II, here’s what Gale actually says:

“Crispin asked for some things that were pretty ridiculous for an actor in his position in the industry. He basically wanted to have the exact same deal as Michael J. Fox, and even asked for some things that Michael wasn’t getting. And I had this phone conversation with his agent. I said ‘This is just completely ridiculous. Go back to your client and talk to him and if I don’t hear from you in two weeks, we’re just going to assume that we will not have Crispin Glover in the sequel.’ So the whole idea in Back To The Future Part II that George McFly is a tombstone was a direct result of Crispin deciding that he didn’t want to be in the sequel.”

When Gale himself appeared on Opie & Anthony in 2009, he went into even more specific detail about the situation. (You can listen to these comments at the end of this clip and the start of this one.):

“There are some actors who think that popcorn movies are just awful things. They’re true ‘artists,’ you know? And Crispin was in that mode… His agent called and said, ‘Crispin wants Michael J. Fox’s deal,’ which was $2 million, ‘and he wants script approval.’ And I said to the agent, ‘Look, I’m not even going to dignify that with a response, that’s crazy! Michael J. Fox is on the number one television show in America, of course he’s going to get $2 million for this.’

The final offer that we made to Crispin—first of all, Crispin wouldn’t even budge off that. So we said, okay, well, shit. So I said to the agent, ‘I want you to tell your client two words: Richard Castellano.’ You know who Richard Castellano is? …Clemenza in The Godfather. He was a stickler about wanting too much money for Godfather Part II so Francis [Ford Coppola] killed him! Clemenza’s dead. He’s a black arm band in The Godfather II. So I said to the agent, ‘Look, we can always have Crispin be dead in the future. George McFly could be dead. Tell your client that if he’s doesn’t’ — and the agent knew that this was insane but two weeks later, agent calls me back and says ‘Nope, sorry, he won’t budge.’”

Surely there’s a bunch of he-said, she-said here. But Gale and Glover do agree on one thing, regardless of whether Glover wanted Michael J. Fox money or compensation in line with the rest of the supporting cast: no matter how much Gale actually offered, Glover did want more. So maybe there’s some truth to Glover’s assessment about propaganda; more money does not equal more happiness.