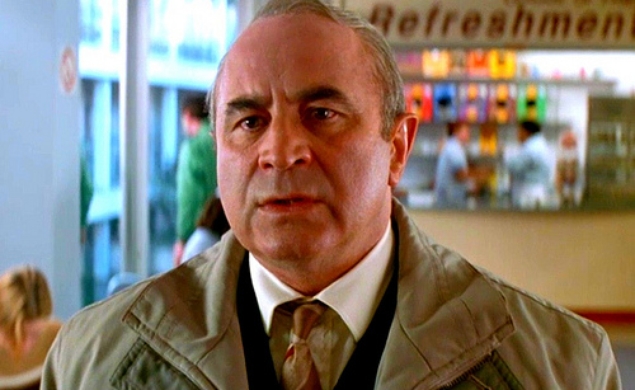 Even though Bob Hoskins had retired from acting a few years before he died, he had such a long and varied career that it felt like he could pop back up on the screen at any time, and give another one of his signature performances combining heart and edge. But since that’s not going to happen now, we’ll have to comfort ourselves by rewatching Hoskins at his best (while regretting that limiting ourselves to five movies means not writing about Pennies From Heaven, Twenty Four Seven, Last Orders, and so many more):

One of Hoskins’ best qualities as an actor was his ability to play dangerous men while conveying the real human desires and aspirations beneath their rugged exteriors. He left a strong impression in his first big movie lead, playing a mob boss in The Long Good Friday. Set over the course of a violent Easter weekend in London, The Long Good Friday frames Hoskins’ Harold Shand as a keen, charismatic man, whose biggest weakness is that he’s begun to fancy himself as a legitimate tycoon with ambitious plans, while the people under him are still scrambling. Shand’s dawning awareness that his violent past is catching up to him is heartbreaking to watch—though it doesn’t make it any less thrilling when the gangster gets back to his bloody roots.

Hoskins has a small role in Terry Gilliam’s dystopian nightmare, playing one of two workers from “Central Services” who come to check on Jonathan Pryce’s malfunctioning air conditioner, but he makes a big impression. In a few seconds, he creates an entire character out of four lines and a couple of close-ups. Once you’ve seen the film, you never forget his bug-eyed Cheshire smile while he gleefully asks, “Trouble with your air conditioner, sir?” or the way he laughs off Pryce’s denials with menacing intensity. In retrospect, it seems like Hoskins’ red jumpsuit and vaguely plumbing-related job here might have helped him land the role as Mario in the Super Mario Bros. movie. But don’t hold that against it.

Hoskins’ knack for inhabiting characters with bruised centers came in handy again with Neil Jordan’s 1986 drama Mona Lisa, in which he plays an ex-con employed by his old boss (Michael Caine) to be the driver for an expensive escort (Cathy Tyson). It’s one of Hoskins’ most nuanced performances—even though much of it is internalized. He ranges through affection for his client, distrust of his former colleagues, anger over the idea that he might be a pawn in some larger scheme, and a general fatalism born of years in prison. It’s the flip-side of The Long Good Friday, with Hoskins as a man on the bottom in a criminal organization, and dealing with his shaken confidence.

Robert Zemeckis couldn’t get a hold of Bill Murray, his top choice to play jaded private eye Eddie Valiant, so the role eventually went to Hoskins. Murray’s loss was our gain, as Hoskins turned in one of the great performances of his career. His Eddie was sullen and moody enough to anchor a legitimate film noir, which made his gradual transformation from surly private eye to singing, dancing hero that much more satisfying. Hoskins also deserves a huge amount of credit for making Roger Rabbit feel like a tactile presence in every scene; acting opposite dummies and mechanical devices, he helped establish a believable reality where man and toon live together in pie-throwing disharmony.

Hoskins didn’t get as much attention as he deserved for playing a kindly psychopath in Atom Egoyan’s creepy 1999 thriller Felicia’s Journey, but then, the movie itself remains highly underrated. Elaine Cassidy stars as the title character: a young pregnant woman who runs away from home and is taken in by a seemingly soft-hearted chef named Mr. Hilditch, played by Hoskins. Egoyan inverts the Little Red Riding Hood tale, showing a heroine who leaves grandma’s house and goes to live with the Big Bad Wolf. Felicia’s Journey is less about what Mr. Hilditch will do to this woman than what he has done in the past, and why. Hoskins gives a strangely sympathetic performance as a man still dealing with the guilt and corrupting influence of his twisted upbringing.