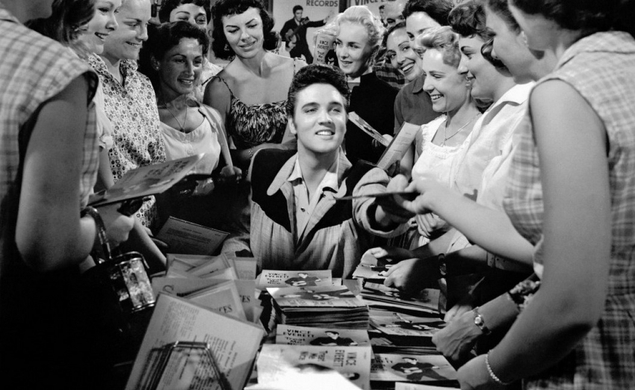 Baz Luhrmann’s The Great Gatsby wasn’t my favorite movie of 2013, but I give it a certain amount of begrudging respect, if only because it was a fairly faithful adaptation of F. Scott Fitzgerald’s book that was released in the middle of summer movie season and still managed to earn $144 million in the United States and $350 million worldwide. In a move that suggests Luhrmann agrees with Gatsby about whether a person can repeat the past, TheWrap reports that he’s now in negotiations to follow-up the film with a biopic about Elvis Presley.

The film, which is set up at Warner Bros., is being scripted by Kelly Marcel, the writer of the upcoming Fifty Shades Of Grey movie. TheWrap says the film is not “based on any pre-existing material” and may focus on one or more periods of Presley’s life. Luhrmann hasn’t made a biopic in his career, but he’s no stranger to music-based projects; his most famous work remains his version of Moulin Rouge!, which was full of pop songs. Previous Elvis Presley biopics include John Carpenter’s hard-to-find 1979 telefilm starring Kurt Russell, and a 2005 TV miniseries starring Jonathan Rhys Myers.

Three weeks ago, Luhrmann was reportedly in talks to direct a big-screen version of the old television show Kung Fu, and it isn’t clear which of these projects he might tackle first. If I had to guess, I’d expect he goes for Elvis. As for the reasons why, I would say it’s one: for the money. Two: for the show. Three: to get ready. And four: for the money again.